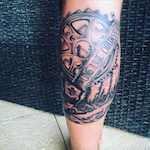 First he auctioned off his old race jerseys to help raise money for the Steve Smith memorial bike park. Now, on Stevie Smith’s birthday, he’s got himself a tribute tattoo of the the late, great racer.

The tattoo has the famous chainsaw that was given to Stevie after his 2013 World Cup Championship win, plus a chainring and a Canadian landscape. it looks rad.

He also got a picture of himself having the tattoo done. Shout out to the artist ‘Abz’ who has done a great job.

Getting some fresh work thanks to @pretty_nuisance from @thelocaltattoostudio these guys do the best work. Get yourself down there are see Abz ???? #tattoo #thelocal

The Scotish Era comes to an end

And the riders are...