Four riders: Rowan Sorrell, Rhys Holtham, Steve Jones and Rhys Sutton hit Fenasosa Bikepark in Spain for a weekend to see what its all about.

When was asked if I fancied a cheap weekend in Fenasosa Bikepark with some of my riding buddies from the Port, I was hardly going to turn it down. So here you have it, the average Joes’ weekend warrior trip to Fenasosa Bikepark with Randy on hand with his point and shoot phone camera to snap some of the action.

The (very) Rough Guide to Fenasosa.

I’d been given a heads up about this place by Victor Lucas (photographer) and Steve Jones (Dirt Magazine) previously, tales of wild boar, Paella and copious amounts of wine in grandiose settings but funnily enough not too much mention of the riding, so I was heading out there with modest expectations, not expecting anything special just glad of a cheap break in the sun for a couple of days and to get away from my office computer. Well they say sometimes it’s best to have low expectations as everything beyond this comes as a bonus, well we’d certainly hit Brucie’s bonus hour, what a cracking little park, set on an old family hunting estate, the rights to shoot have now been cut back to one weekend a year and with the grandsons love of biking, three years ago the family set about creating a Bikepark on the grounds.

They have done a great job in such a short time too, the trails were all fun to ride, and the park is open every weekend all year round. This is a great place to get away for the weekend, there are 8 downhill tracks, a four cross course, a woodpark and the really fun beginners trail called ‘Bambi line’, so in 2 days you will only just get to grips with everything that there is to do in the park.

So how does the park ride? Well it’s certainly a game of two halves, the park is rocky and rough as hell for over half of its length on the upper slopes and then rolls down into smooth flowing trail with berms and jumps a plenty, this is great as you get a truly technical workout for the majority of the runs and then it spits you out into the smoother and faster fun stuff at the bottom. 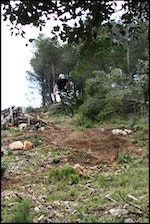 Alex the young rider in the family is a good racer currently leading the Spanish junior downhill rankings so he can ride a bike and as such there are a number of decent sized jumps in particular a 40ft road gap into a 40ft double that can be cleared well down the landing to 50ft+ and all the trails have some good technical rock features in them.

Everyone on the trip loves riding bikes but just as much as the love for bikes we all share a love of eating and at Fenasosa we were in good hands, as they know how to do lunch in style.

For 10 euros extra per day you can have a 3 course meal in the mansion with plenty of beer and wine, this was something else, the food is plentiful with local meats from the estate and the Spanish like to have a drink with their meal, seriously some guys were sinking four cans of beer and a couple of glasses of vino before heading back out onto the trails in the afternoon. When in Rome and all that, we got into the swing of things and riding after lunch became a very relaxed affair!

Fly to Alicante or Valencia with Easyjet, the park is about an hour from the airports. The park is open from 10am till 6.30pm each day and if you can get together a group of 10-15 riders the park can even open for you in the week and provide lavish accommodation in the grounds itself. Drop the guys a line at the park and they will accommodate you, but not for groups of less than 10 as it is just not economical for them. Bikepark entry with uplift is 25 euros a day and the lunch with all you can eat food and drink is 10 euros – Bargain!

I was expecting an easy ride out there but it’s pretty rocky up top with no soft places to land, so I would recommend that people pad up if they are heading out there, Garlic Dave was lead into a section offline and took a pretty heavy slam off a big rock drop bringing an early end to his weekend. Check his slam on the video.

That said, Fenasosa is somewhere every keen rider should have on their radar next winter to break those cold and wet winter months, it’s a great park and if they continue building at the rate that they have over the past couple of years, it’s only going to get better.

Rowan Sorrell has just been out in France racing the mountainbike equivalent of the MX Des Nations, the similarly titled Enduro Des Nations. Here’s Rowan’s...

The Åre bike festival swings into action this week in Sweden. Dirt columist Rich “Cunny” Cunynghame is in Åre (the locals pronounce it “ore-eh”) now...

Rowan Sorrell has just been out in France racing the mountainbike equivalent of the MX Des Nations, the similarly titled Enduro Des Nations. Here’s Rowan’s...

The Åre bike festival swings into action this week in Sweden. Dirt columist Rich “Cunny” Cunynghame is in Åre (the locals pronounce it “ore-eh”) now...

Okay, you probably know by now that it’s not wives but bicycles we’re talking about here, maybe we will do a wives edition one day. Here’s...

This is going to be concise – with a whole load more of detail to follow both here on the website and in future issues...