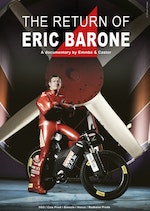 If you dont’ know who Eric Barone is then you need to watch these videos to double check how fast he has been on a bike. He set the World Record for downhill on a modified bike in 2000 when he clocked 222km/hr or 138mph in old money at Les Arcs on the speed ski run. Speaking of speed records, if you didn’t know Markus Stöckl who runs the MS Intense Team holds the record on a production bike which isn’t far off the modified record at 210km/hr or 130mph, he set it in 1999 at La Parva in Chile. Have a watch of these videos, would you want to give it another go after crashing like he did?

In 2002 Nicaragua was the scene of Eric Barone’s near death accident when his forks snapped just after he registered 172km/hr or 107mph through the speed trap. He was thrown off the bike and tumbled down the hill breaking a load of bones and losing his helmet at the same time. He didn’t ride a bike for 10 years after that but now he is back and attempting to break just his record and no more bones.

At 53 Barone is aiming to reach 230km/hr and this is the trailer for a film about the attempt, it looks pretty damn good to us and the hour long film will be out soon. Big Mike has been told there is a premiere in Paris so he’ll probably dig out his tux and head for the red carpet. We’ll keep you updated on the release as we get news.

Here’s the word from the press release:

‘THE RETURN OF ERIC BARONE’ A DOCUMENTARY AT FULL SPEED

How do you get back on your feet after a near-death experience especially as an extreme sport legend in his fifties ?

Although he retired in 2002 after a nearly fatal accident, the speedbike world record holder makes his come back at the age of 52. Directors Emmbé and Castor followed him for three years to document the story of his return. Eric Barone, 54, is the fastest man on a mountain bike, with a speed record of 222.22km/h on snow. In 2002, he violently crashed during his attempt to break a new record on the Cerro Negro volcano in Nicaragua. 10 years after coming so close to death, he decides to overcome his fears and live his life to the fullest. For him, that means setting up a new attempt to break the world record, he still holds.

‘The Return of Eric Barone’ is a 52 minutes documentary shot in HD on the snow speed tracks of Arc 2000 (Les Arcs, France) and Chabrières (Vars, France)

After the success of ‘Over The Edge’ independently produced and sold worldwide by NBC Universal and Terranoa, the direction and production have once again joined forces to produce their second film together. The producer 3GO, teamed up with Cow Prod in association with Binocle, Horus, and Redkenn Prods to make this film available worldwide for TV broadcasting.

We can’t wait to see this and making the record would be an amazing achievement for anyone let alone someone who has come so close to killing himself trying it before.

Last weekend Emyr Davis managed to clock the second fastest time of the day at a downhill race...on a BTR Belter hardtail!

Here are your video highlights from the Trans Provence 2014, along with the dates and entry information for the 2015 event...

Last weekend Emyr Davis managed to clock the second fastest time of the day at a downhill race...on a BTR Belter hardtail!

Here are your video highlights from the Trans Provence 2014, along with the dates and entry information for the 2015 event...

If you can't get enough of your enduro racing then you'll be pleased to hear that for 2015 Ireland gets the brand new Vitus First...