We know what Rampage is like for riders, the preparation, the nerves the excitement – the build up to Rampage is huge. All the best riders and media flock to Utah for what is arguably the biggest event on the mountain biking calendar.  But what’s it like from a different perspective? What’s it like to be there, to be part of it all, to shape the lines and soak up the atmosphere?

We go behind the scenes with Traharn Chidley, to find out what it’s like to be out at Rampage. She’s out there with Mike Hopkins, as a partner, assistant and digger. As a rider herself she knows what Rampage is to mountain biking, she gives us an insight into what’s going on behind the scenes.

There’s freeride and then there’s Rampage. Traharn explains what Rampage is like from the perspective of a rider, and gives insight into the terrain:

As a fellow DH rider/racer, my mind is blown. I’m struggling walking up the mountain let alone riding it. There’s sheer drops, canyons and staggery rocks everywhere, but its not stable, it’s constantly crumbling away beneath you. I feel like its similar to snow, but I don’t have much experience with that terrain either.. I’m getting used to the crumbling cliffs and relaxing with it a bit more. Feels like hiking sand dunes on a golden beach .. But there’s sharp rocks poking out, huge drops all the way down and a massive canyon gap at the bottom .. No biggie eh.

Mike checking out his lines

Mike Hopkins hails from Rossland, British Columbia. He’s a professional mountain biker as well as a big mountain skier, so he’s no stranger to big terrain. He’s also no stranger to Rampage, coming back for round two this year and hoping to qualify for the main event.

We find out how he feels going into Rampage this year:

Excited, no nervous.. Both!

Revved up or meditative?

Picking lines or focusing on tricks?

Favourite thing about the course?

The natural terrain! Having to be creative

Making it down and being stoked on my run!

View from the top

A usual day in the run up to Rampage is pretty intense, the guys and girls are busy working, shaping lines and making sure everything is ready:

A usual day involves getting up.. early. Making sure Mike eats a solid breakfast, not just his usual 3 shots of coffee. I make him a packed lunch.
We then drive down to the site, and I get my mind blown every time.
We head to the top and start working on his path down, if I’m just in the way then I’m promoted to chief photographer.
We usually leave the site at sunset .. Which is always breathtaking! Then  head home, cook an energy filled dinner, and use my masseuse skills to loosen mikes digging shoulders.

Heading up at the start of the day Sunset in the Desert

To be there and see what riders go through is something we don’t get to see sat at home watching live. For some, Rampage is something to work towards at the start of the year. Many freeriders compete all year as part of the FMB World Tour, finishing the year in Utah at Rampage.

Mikes been building up to this pretty much all year, he moved to Whistler in May, and he’s been smashing the big jumps, he feels strong and prepared.. I’m here for moral support, to make sure he remembers to have fun and giggle, and generally make sure he’s eating properly and loaded up with energy.

Busy working in the desert sun

Being at Red Bull Rampage is a unique experience, to see it first hand is probably the only way to fully understand the terrain, and just how big Rampage really is:

I feel extremely lucky and privileged to be here. I didn’t know too much about the event before, but it instantly opened my eyes to how big, insane and magical it is, it’s easily the biggest, most impressive mountain bike race in the World.

We know that riders get nervous, but how about all the other people around them? Team managers, friends, partners?

As mikes partner ..I’m crapping it. I feel just as nervous as when I raced my first World Cup, it genuinely feels like I’m about to race this course. I know mike’s going to do an awesome job, but I can’t get rid of these race nerves. I’ll be watching through my fingers with my heart in my throat every time he rides away from me, heading towards what looks like the edge of a cliff.. Because it is the edge of a ‘crumbling’ cliff!!

Checking out the view from the boner..

Since getting out to Utah it’s been non-stop for everyone involved with making Red Bull Rampage happen every year. Traharn tells us what she’s been up to in the desert:

I feel like my job is a gnarly modern day housewife and moral support worker. Making breakfast, lunch, dinner, spending all day on the site, helping dig, taking pics, trying to keep spirits high.. Although it’s not always the time for my childish input. I’m also a masseuse which comes into play after Mikes been digging all day.

As a rider I see how lines work, and what needs to be done.. But how they got that idea in their head is crazy, and then to go do it is a whole other matter.

‘You need wings for this place’ 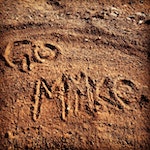 Red Bull Rampage dates back to 2001, it ran until 2004 before stopping until 2008. There is no doubt that Rampage is one of gnarliest events in mountain biking, but it’s also cemented in the ethos of all things freeride. It brings creativity to a whole new level, allowing riders to craft their lines, and battle it out for points based on the risks they take and the tricks they pull off. As the sport has evolved so has Rampage.

I have So much respect for every rider here. It doesn’t feel like any race I’ve been involved in, there’s just 40 riders, all personally invited to race the event for being awesome. Everyone has the same start and finish and the rest is free for all. It’s like a spider-web of wild lines, not one rider does the same line down, everyone creating something epic and gnarly. Everyone’s stoked on other riders lines and hi-fiving all over the show. Each rider is either working on their own, or with a real small team, building and hacking away at the mountain. For such an intense race, the vibe is so chilled and friendly.

Take off.. Send it to the moon

Wednesday was the first day riders were allowed on course to test out everything they’d been busy building, but even the desert isn’t free from rain:

Wednesday was the first day I saw people ride the course. Mike was killing it and I got some cool shots. Mid afternoon the rain came in pretty hard and shut the site down. Hopefully everyone can still get enough practice time in before qualifying on Friday .. it’s going to be epic!

Taking in the view at the end of another day

Catch up with the latest from Rampage in our video roundup.  And watch all the action live on Red Bull in just a few days time!

VOTE and WIN! The final edits from Run to the Hills are here.

Run to the Hills

VOTE and WIN! The final edits from Run to the Hills are here.