The final round of the Pearce Series went down at Bucknell, Shropshire.

Nathan Carvell braved the weather and brings us this great report.

‘I’ve not had one clean run yet’

The sixth and final round of the 2010 Pearce Series landed at Bucknell, a perfect end to a perfect Series. With fingers, toes and other extremities crossed for another blazing dusty weekend the heavens opened on Friday night to dowse the luscious green of Shropshire turning the fields into tyre-sucking quagmires. The year previous saw a warm finish to the series. This time round we were starting off a little differently…

As the hardcore woke up to a damp field the sensible of us arrived in dry vans and cars and got stuck in the mud – a small price to pay. As the engines fired up on the Land Rovers and the pistons started pumping, the usual massive rush from the racers to get up and practice was not so. Instead, the eager got up there to dry things out a touch. So as you can guess we were on the moist side of things. Saturday practice progressed and ran without a hitch, the track drying out with every run, things were getting faster and faster. Tyre choice was a tough one with some running spikes for the grease and mud and others sticking to a trusty High Roller type tyre. But, as has been the case this year the dry tyres took the first win of the weekend.

Bucknell is a track designed by non other than World Cup racer Marc Beaumont. With that in mind and as you can imagine, boys become men and women become… oh hold on that doesn’t work. Well, it’s a physical track. Starting with a mellow pedal off the start line choices were being made from the off. A steady section through the trees had you facing stumps, roots and trees. Nothing too crazy, but enough to get you in the mood so to speak. Popping yourself into a berm you hit the first of three doubles, the last being a slight left hip.

Into skiing? You’re in luck, ski jump o’clock! No snow, but man alive you could send the distance of at least two Mondeo’s. Now you’re clocking up the mph’s before you smash into a big old braking bump riddled berm onto the new addition of two tables rather than just the one of last year. There were a lot of complaints regarding these two beauties as they were rutting up like deep chino pockets. Said ruts had riders flying of in an array of directions onto landings with ruts as deep. Some maintenance on Saturday evening improved them for the first couple of Sunday’s runs but they soon rutted up again. After all they were as fresh as a garden courgette, give them some time to settle in and they will be uber fun!

The second big change to the track was in the form of some increasingly tight switchbacks. Slowing the track down considerably, these added an extra dimension to the open section. This is where the real challenges started. Popping into the trees round a tight left-hander dodging some roots a couple of line choices took you deeper into the dark of the trees. Now when ‘the roots’ are mentioned you all know what the talk is here. Imagine dropping a freshly boiled pot of spaghetti on the floor, wiggle your foot in it a bit, trim up the edges, squirt some lube on (ky or chain, your call) and you getting somewhere near. The line was anyone’s guess, each rider desperate to find the patches of grippy mud amongst the squirmy mess. These roots took more victims on the Saturday than that Doctor chap, bad taste, sorry, but no one died. Over the Sunday though they were drying up a treat so you could just rattle straight across them come race time.

The rest of this wooded section was like your were on rails with cheeky berms to carry you safely down to the jump into the ‘swimming pool.’ The fire road crossing had been steadily filling up with water from somewhere meaning the manageable puddle soon became something you had get your feet wet in. A healthy helping of the ‘swimming pool’ had been carried into the next section, which on appearance looked as messy as a night on the tiles with Keith Richards, but in actual fact, unlike old Keithy boy, it held up fine. This next section had you pointing down a touch more on a decline now. Weaving trees and skipping roots there were a few more line choices now. Some obvious some not so, but the wide then high line took the vote as line of choice. Cutting the off-camber and dropping down into a naturally formed berm it was line choice time again.

Choosing between a high line, low line and the now forming middle line was pants and trousers. Either way you had more roots to munch on leading up the step down. Last year you sent the drop and in an instant you were up the bank into the corner. This year however, the Pearce crew had extended the landing a touch giving you a second more thinking time before you hit the loose and shaley hairpin.

A couple of berms and a hip later brings you to the (imagine a sarcastic tone here if you will) biggest line choice of the track. The rooty shoot into another shaley berm or the round-the-houses-to-see-uncle-Bernie line. At a guess the round-the-houses-to-see-uncle-Bernie line was there as a matter of safety so those not choosing to take the shoot can still get safely down. No problem. But being witness to a near t-bone during first race run as the long line rejoins the track was not a pretty sight. Anyhow with just a couple of now dusty corners to snake round all that’s left now is a drop, double or slope across the fire road into the long grassy arena. If Friday’s rain had of carried on these long sweepy grassy turns would have been full on fun but as it happens things were dry. Of course, the style jump was ever-present. This time in the form of a hip. After style points were won or lost the ever-lasting grassy sprint to the finish line put the final nail in the legs.

The winners. Ashley Maller took the Elite men’s race and the overall with the only sub-two minute run of the weekend with a mad fast 1:59.61 and 808 points with Joe Smith just 0.4 of a second behind. Robert Smith took the second overall spot on 772 points with a consistent series. Emma Wareham won the Elite women’s race with a 2:30.91 and the overall ahead of Jess Stone with 948 points and 384 points respectively. 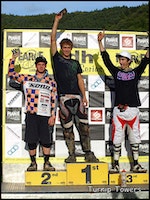 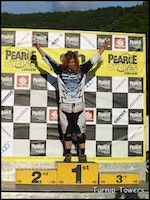 To sum up the Series, it’s been another huge success for the Pearce massive. Even against the challenging Forestry legislations they have dealt with it amazingly and provided us race hungry bicycle nuts with a season to keep us coming back year after year. Speaking of which, the winter uplift dates have already been announced. Check http://www.pearcecycles.co.uk/uplift_dates to keep your cogs whirring.

If you have made it this far, I’m pretty confident in saying that in behalf of all the racers who took part this year a massive thanks needs to go out to the whole Pearce team, I wish I knew names but to all the uplift drivers, marshals, medics, timing crew, Dave and Lindsey and anyone else involved, thank you!

See you next year! (Haven’t you started training yet?)

Full race and overall results can be found here: http://www.pearcecycles.co.uk/results_pcss10_round_6

DirtTV’s Parkin brothers have proved themselves more than capable when it comes to moving pictures and it looks like they’re fairly handy with non-moving pictures...

The final round of the MaxiAvalanche went down at the weekend in Flims, Switzerland. Old Skool UK rider Aidan Bishop made the trip out there...

DirtTV’s Parkin brothers have proved themselves more than capable when it comes to moving pictures and it looks like they’re fairly handy with non-moving pictures...

The final round of the MaxiAvalanche went down at the weekend in Flims, Switzerland. Old Skool UK rider Aidan Bishop made the trip out there...

Saracen are back and looking good. We’ve got our hands on their downhill bike, the Myst. There’ll be a full review in the magazine soon but...

The final day from Interbike, Las Vegas and anybody who’s anybody will be heading out to photographer Sven Martin’s “Wild Party” tonight. Awesome work Sven!