Mark Shilton has once again been crunching the numbers, this time from Mont Sainte Anne…

Round 4 done and Gee just misses out for the second race running. Steve Smith was a deserved winner, especially with the changeable conditions that the last 15 riders had to endure. So did the rain play a part? and where did Steve Smith win it and Gee Atherton lose it?

Splits-wise it was a funny race. The first split was about 2:50s into the course – almost 70% of the race done! With this in mind, the riders with a good first split were always going to be in a strong position.

Gee Atherton and Steve Smith were out on their own right from the start. Only Sam Hill managed to get within 1.5 seconds of this pair at the first split whilst less than 2 seconds covered the gap from Hill back to Troy Brosnan in 20th. Lorenzo Suding was a surprise appearance in the top 5 at this stage of the race. Unfortunately he faded back to 16th by the finish but he had some speed in the top section of the course and improved on his 26th place qualifier. Aaron Gwinn was clearly back up to speed in Mt Ste Anne and set off well with 5th fastest at split 1 on a recently soaked track. 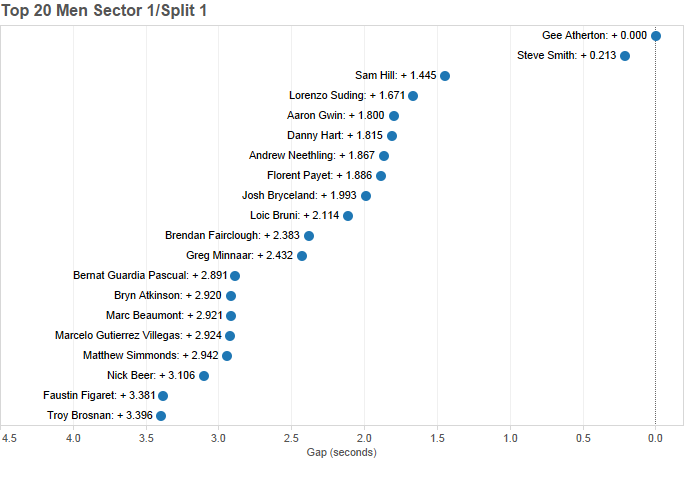 Sam Blenkinsop couldn’t follow up his strong 2nd place in qualifying on the first sector, placing only 32nd and nearly 5 seconds slower than Atherton. Greg Minnaar was also off the pace here in 11th place, possibly affected by the rain although Sam Hill went off 3 minutes before and was a second up on Greg’s time.

It was difficult to see if Sam Blenkinsop had a problem in the top section or the rain was preying on his mind but by Sector 2 he was charging! He flew through the rocks to take the fastest time although Smith and Atherton were right behind him, both within a quarter of a second. Gee was 0.213 seconds in front of Smith at Split 1, but Smith pulled back 0.195 seconds in Sector 2 leaving the overall gap at a mere 0.018 seconds at Split 2.

Greg Minnaar made up ground from his relatively slow start, going 4th fastest in Sector 2 and moving up to 4th overall in the process. Sam Hill was only 7th fastest and over 1.2 seconds behind Blenkinsop and Smith. Overall at Split 2 Smith and Atherton were out on their own in 1st and 2nd place, but the gap between 3rd and 8th was a mere 0.9 seconds meaning there was all to play for even on the relatively short final sector…. 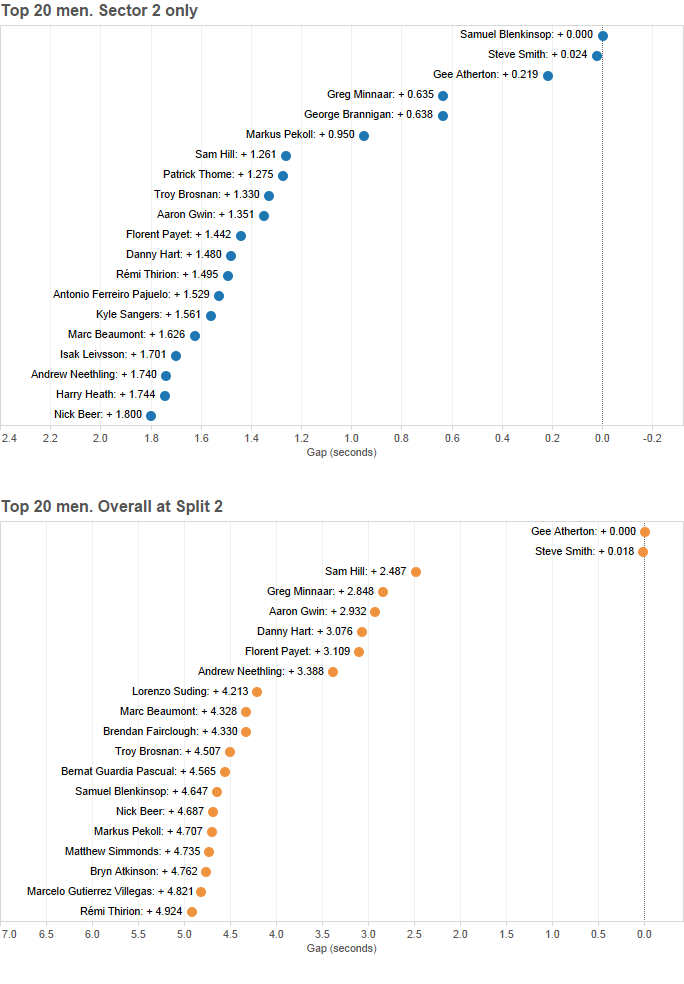 Only 25 seconds in the final sector and whilst Smith and Atherton were out of sight by this point, the podium and top 10 was still tight enough for riders to take a few risks in an attempt to push themselves a few places up the rankings.

For the second race in a row Gee made a mistake that cost him the race in the final sector. He clearly had a ‘moment’ in the rocky approach to the wooden bridge jump, unclipping and losing a lot of speed in the process and rider after rider was making up time on him on the run into the finish, even if they couldn’t quite match his overall time. That was until Steve Smith, less than two hundredths behind remember, held it together in the final sector going third fastest, but crucially faster than Gee who was only 19th and 1.5 seconds back. Given the tight times between 8th and 3rd at Split 2 the podium was still wide open but Hill, Minnaar and Gwinn managed to hold on to the podium spots with the 2nd, 1st and 5th fastest times in Sector 3. 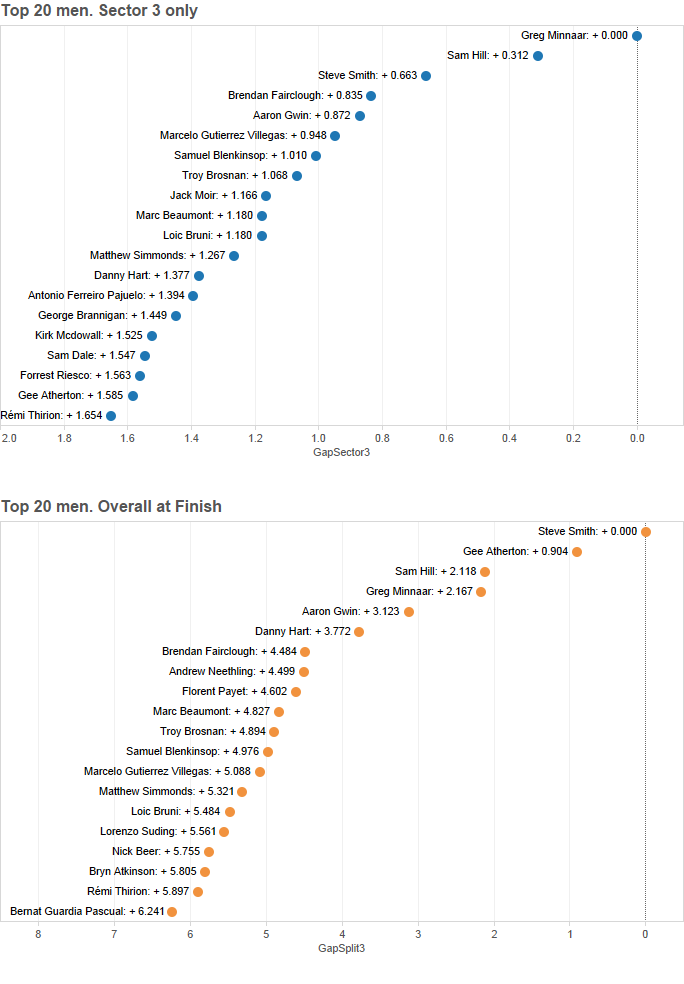 The biggest mover in the tight times around the top 10 was Brendan Fairclough. He was lying in 11th place at Split 2 but a combination of a fast final sector and slow times in the final 25 seconds from Florent Payet (34th, +2.174), Andrew Neethling (25th, +1.792) and Lorenzo Suding (31st, +2.029) allowed him to sneak up to 7th place overall. This was his first top 10 World Cup finish since the end of the 2010 season at Windham. Is this the confidence boost he needs to move back up to the very top?

Clearly the rain meant a change of tactics and mindset for the last 10-15 riders down and it must have played a part in the race. The main losers from the rain were riders setting off from 13th to 7th who caught the worst of the rain storm – Gutierrez Villegas, Beer, Macdonald, Mullaly, Brosnan, Bruni and Hannah. None of these broke into the top 10 although Brosnan and Gutierrez Villegas were 11th and 13th. Amazingly Nick Beer managed to take 17th with a pretty big crash up top so who knows what he might have been able to do in the dry?

What really stands out though is that five of the last six riders down the hill made up the top 6 overall. Although the track was drying they still had to sit at the top watching it rain and it must take some serious mental strength to keep focused when the conditions are changing around you like that, especially when you know Gee Atherton has enjoyed a dry run already.

The heatmap shows that Steve Smith wasn’t fastest on any sector, placing 2nd, 2nd and 3rd, but his consistency was what won him the race. Gee lost it in the final sector and Sam Hill’s 7th place in Sector 2 put paid to any late charge for him. 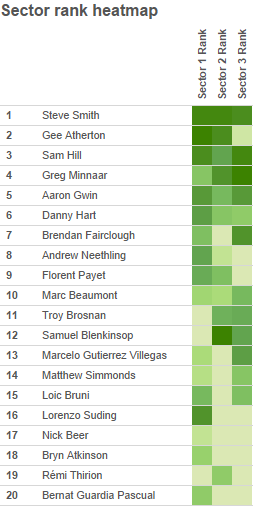 So, Smith takes his home win and becomes only the sixth rider to have won more than one World Cup race since 2008 (The others being Gwin, Minnaar, Peat, Atherton and Hill). We’ve seen with the likes of Hart, Blenkinsop and Macdonald that there seems to be a step up from winning a single World Cup (or World Champs in Hart’s case) and the nous and experience required to win regularly. Smith looks fit, hungry and focused this year; have we just witnessed his graduation into the very top echelon of the downhill ranks? Only the rest of this season will tell….

With bike choice being a hot topic at this years World Champs here are the geek stats that you've all been waiting for...

All the Saracen team news from MSA along with some great shots courtesy of Laurence Crossman-Emms...

With bike choice being a hot topic at this years World Champs here are the geek stats that you've all been waiting for...

All the Saracen team news from MSA along with some great shots courtesy of Laurence Crossman-Emms...

With two wins in MSA it wasn't a bad weekend for the Lapierre team, and here's their team video from the race...

Steve Smith took the win in MSA, here is another amazing nugget of Parkin gold.