While us lot in the UK have been dealing with snow for Jimmy Carling and the New Zealand crew it’s been a week of sun, fishing and pumptrack parties…

The expression “feast or famine” couldn’t be more suitable to describe the last couple of weeks. A week ago as I sat down to write I found myself scratching my head a bit… The relentless heat that I have harped on about recently seemed to be taking its toll as most people were favouring forty winks over riding bikes.

This, coupled with the cancellation of the Gorge Road Opening Jump Jam on the weekend left me with little to write about, other than how excited I was to finally own a teapot and how impressed I was with the progress of my potatoes in the vegetable patch. This week however, Queenstown has been a busy little hive of excitement with numerous social gatherings, a stark contrast to the quiet nature of the week previous. But the downtime is to be savoured. A chance to recharge your batteries a bit. As much as we crave summer during the colder months and the endless opportunities it brings to pursue our two wheeled ambitions, it’s important to throttle back occasionally not only to allow one to catch up with oneself but also in order to not to let the subtleties pass you by.

How glassy the lake is, how the low evening sun decorates the hills in gold or how the air is always filled with a faint sound of birds and bees. Excuse me for sounding a little “Life is a river…”, but as people who spend their time in the hills, us mountain bikers should take pride in the little things the natural world has to offer. Don’t you agree?

This Christmas I have been fortunate enough to go on what was by far the greatest company “do” I have ever been on. With only 3 of us at NZ Tree Care, all of whom passionate outdoors-men, we were treated to two days fishing the Lochy, arguably one of the greatest fishing spots in the world, about halfway between Queenstown and Kingston. Cell phone coverage disappears once you’re at the river mouth – gotta love being disconnected. Brown and rainbow trout are littered throughout the river, but even for an amateur fisherman like myself, it is still a stunning place to spend time, getting lost in your thoughts in the process.

Away from the fishies and back on land, the Queenstown mountain bike club held its Christmas barbeque at One Mile last Friday, with free shuttles to the top of Wynyard. Unfortunately I was unable to make it but from what I gather a good evening was had by all. It was also an opportunity to bid farewell to Andrew “No-wood” Norwood who is leaving the hills of Central Otago for the warm beaches of east coast Aussie. I suppose I speak on behalf of everyone in saying thank-you for all your efforts, whether they have been on the end of a spade or the end of a phone or in making everyone laugh. You will be hugely missed and hopefully it’s more a case of “until next time” than “goodbye”. And sorry our final ride at 7 mile was such a fail-fest shitter! Best of luck big man. Mind those slippery snakes over there… What are they called again? Oh yeh, Aussies… “Until next time dude…”

And of course it wouldn’t be Midweek Enzed without something to do with the League Of Gentlemen. Last Thursday’s pumptrack party did end up happening at Jardine’s park after all thanks to some track buffing by the boys. Another great turnout and another great evening. After some watering down and sweeping (broom and watering can courtesy of NZ Tree Care… Plug.) it was rolling just lovely.

The three main events consisted of drinking beer, a fastest 3 laps competition and finally a fastest lap on Ginge’s Rotec competition. Riding a Rotec around a 9 second lap of a pump track was an experience similar to popping one’s cherry. You don’t really know what’s going on and it’s all over way too quick, but in the end you know you had a laugh and all your mates give you a cheer and pat on the back when you’re done. I feel the pictures sum it up better than my words, so for this week I’m gonna keep it brief let the photos do the talking. 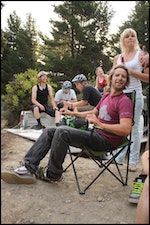 “Had to include this. Jt Huck, living up to his name at Dirt Park…”

In terms of quality Chris King might now be facing some competition from the equally impressive Cane Creek 110, but there’s still something special about...

Our New Zealand correspondent Jimmy Carling undertakes an amazing four day adventure in the mountains and gets quite philosophical and a little bit naked. Meanwhile in...

In terms of quality Chris King might now be facing some competition from the equally impressive Cane Creek 110, but there’s still something special about...

Our New Zealand correspondent Jimmy Carling undertakes an amazing four day adventure in the mountains and gets quite philosophical and a little bit naked. Meanwhile in...

Back in My Yard: Video and Photos

In the latest issue of Dirt #107 we featured ‘Back in my Yard’ an inspiring article written by photographer Sebastian Schieck. A small group...

Back in My Yard: Video and Photos

It’s not often these days that a product comes along that is a genuine game changer, but that’s exactly what this Angleset is. Yes we’ve...