Our New Zealand correspondent Jimmy Carling undertakes an amazing four day adventure in the mountains and gets quite philosophical and a little bit naked.

Meanwhile in Queenstown the League Of Gentlemen slip and slide at a ghetto slalom.

I’m going to start off with a bit of a ramble… I warn you though, I don’t really know what I’m trying to say, I don’t feel there’s any real direction to this. Maybe I’m not trying to say anything in particular, just making an observation more like. Anyway… if you don’t like it, well, tough shit. I need to get this thought out of my head.

A few days ago I got back from the Milford Track – a multi day, 55km hike from the top of Lake Te Anau to Sandfly Point in Milford Sound – one of the greatest walks in the world. This walk passes through lush native forest, follows crystal clear, winding rivers that transition between emerald greens and turquoise blues and climbs and descends into the most staggeringly beautiful valley I have ever seen in my life.

Admittedly it is a very popular walk and the rules are strict about which huts you can stay in on what nights due to the volume of people that make their pilgrimage throughout the summer. But the way I see it you have two choices, either get worked up about it, or accept that it’s popular for a reason and instead wake up early and hit the track before anyone else has even surfaced from their sleeping bag. I chose the latter and was rewarded with a most humbling experience – one which I’m afraid cannot be put into words. If you have completed the Milford Track, you will know what I’m talking about and no explanation is necessary. However for those that haven’t, an explanation simply isn’t possible. Now the duality of man has always been something of intrigue to me. Love/hate relationships for example, or soldiers fighting for peace. The possibility of being in two states, conditions or mind-sets I have always found to be an interesting concept. I have always considered myself an avid outdoors-man and as you can tell choose not to limit my earthly passions to just two wheeled devices. During the many hours spent thinking on this great walk, there was a topic which I found myself mulling over for quite some time. The meeting point between industrialism and nature is a type of duality I often struggle with. I hate cities with a passion. I hate people living on top of people, smog, crime, filth and even how despite the large populations that cities possess people are always so alone – for me it’s not how we were supposed to exist. I prefer the way nature replaces the city’s “system” with its “cycle”. Death becoming life becoming death and so on. In fact, I would love it if cities didn’t exist at all and instead we had lush green countryside and pastures as far as the eye could see. But then… as I’m pondering this rather extreme (by modern standards) thought to the sound of my footsteps on a Fiordland walking track, I start thinking about the fact that the exact life that I revere would not actually be possible without cities, factories or industrial progression of some kind. Lost? Well there I am, hiking through outrageously beautiful scenery, amongst the kings of mountains, thinking “this is it, this is how we should be living, just man and the outdoors, this is what life is all about”, meanwhile I’m sporting Gore-Tex boots, synthetic thermals whilst lugging around a backpack containing such completely un-organic things as powdered milk, zip lock bags and a propane-butane gas canister.

The same applies to riding. My smile is longest when out in the back of beyond away from civilisation, which I find uninspiring when compared to the natural world’s offerings. Yet my hydro formed alloy frame is hardly a fruit of nature, nor are the numerous other plasticy/shiny bits that decorate it. Where it gets interesting for me is where these two meet. Sure I want a new bike… Of course I need those new pedals. And yes I would like to pour some bleach down my toilet from time to time! But dam those smoky factories and dam those cities and politics surrounding these things I am in need of!

Maybe I need to accept the urban jungle into my heart a bit more… But I find it hard, especially when the materialism of the modern world is most on display in these busy hubs of civilisation, and people are driven more out of greed than pure passion. I think it all boils down to one thing… I like hills, and I like getting lost in them. I hope you do too. Ramble over. 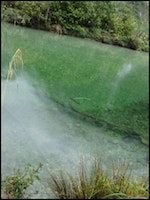 Of course all this hiking meant I missed out on one of the best LoG’s of the year! Snakes in the Grass was held in somewhat adverse conditions, and rather than try and explain what happened, Queenstown’s most honourable courier driver has put pen to paper, or fingers to keyboard, to enlighten you about the most recent League of Gentlemen event.

“Well well well, just where to start with last week’s LOG? Do we start with the pissing rain that dampened many a spirit? Maybe the fact that it turned into a Slip n Slide Suicide Snakes in the Grass for the second year running!! It does lead me to believe that there are events in the world that are just destined to be WET as well as those that are meant to be DRY. Snakes seems to be forever destined to be WET. And I do mean WET. Not damp but sopping WET. The day dawned pissing rain in Queenstown as it had for the previous day or 2 with predictions that it would clear up as the day wore on. This happened for a 20 minute window around 3pm and the sun was for a short while blistering hot. Then in a flash that wonderful thing us summer worshipers cherish so much disappeared as quickly as it appeared to be once again taken over by that thing called rain.

Turning up around 6.30 to start marking out the course that Pang and I had plotted the night before a real concern was anyone actually going to show up? It was after all very winterish conditions…. not great for racing even by LOG standards. We are about the fun after all. After taking some time to carefully slay some skid lines through the cones (yes skidding is contagious here in QT) to stop any confusion in turning direction we managed to scrape together 18 hardy souls, not a great number to try and make a draw with. And yes I did manage to cock it up!!

In typical LOG fashion it was Paper, Rock, Scissors for lane choice and best of 3 in the first round to progress through. A random draw done by Gaz and some interesting battles thrown up as well as some lovely and slightly disturbing attire from Dave Z. Taking it back to the OLD SCHOOL!

Pang and Tom Hey battled early for Vertigo shop supremacy with Pang being the early shop leader. Many of the first round battles went to the 3rd and deciding battle unless you were me. Getting the unlucky draw of Andrew (from the Diaries of Ken vids) and getting cleaned up in the process. Back to what I do best. Organise! Fortunately not too much carnage this year very unlike last year which saw the brothers Weir come off second best. With the weather closing in ever more with some serious nastiness the crowd called for following rounds to be best of 1. This made mistake free runs crucial.

Some more shop rivalry saw Pang take on JT Hucker and also some intershop with Ging (VERTIGO) taking on Mat Weir (R&R). Pang and Ging the victors there but who would make the final? New comer for this year Shaun Kirton (ex YETI WC mechanic) made it past Ben Rafferty who is back in the QT after spending a year or more teaching kids about the joys of 2 wheels around the UK. Semis saw Pang take on Shaun and Ging take on Andrew. Pang and Andrew through to the final which gave Pang shop bragging rights!! Final was to be a one shot wonder but under protest it went to best of 3 and then after Pang took it out under dubious circumstances the crowd where baying for best of 5!! Pang managed to hold the fast Trek riding Andrew who managed to drift it hard twice and lose control in the same part of the course 2 runs in a row.

Good times had by all and a fast finish before the real downpour hit. Do we try for a dry run later in the season?

Also special mention to Mike and Nick seeing as I cocked up the draw those 2 were left to battle it out by themselves for the night. Promise to do better next time!! Next up on the LOG calendar Really Railing Rally Race with Pin it to Swim It at 7 Mile. Hurry back summer!!”

That’s it for this week. Enjoy the piccies.

You probably think that grips are a pretty simple item, and so did we, but when we first got to try these Troy Lee Lock–On...

CRC have just built up their team bikes, the Scalp, and looks pretty sweet too. Lew Buchanan jumped straight on the bike and took it to...

Remember we showed you the story of Scott 11 honcho and trail builder Claudio Caluori and his efforts to build a pumptrack at a hotel...

You probably think that grips are a pretty simple item, and so did we, but when we first got to try these Troy Lee Lock–On...

CRC have just built up their team bikes, the Scalp, and looks pretty sweet too. Lew Buchanan jumped straight on the bike and took it to...

Remember we showed you the story of Scott 11 honcho and trail builder Claudio Caluori and his efforts to build a pumptrack at a hotel...

It might surprise some of you to see a pair of standard rather than Lock–On grips in this list, but these ones are so special...