My name is Rey Misterio and on Saturday I raced the Monduro Halloween Special.

I’m a wrestler by trade but will try anything once, twice if I like it and thrice if it involves drinking cider and fighting afterwards. The Halloween Monduro, down Monmouth way, was a “thricer” for me and I’ll be back time and time again.

Monduro? Monmouth-Enduro. The format? Three timed stages, six to ten minutes long , each containing downhill sections and pedally bits. A thirty to forty minute climb after each stage. Fitness and finesse was the game here with an added bit of skill of trying to see where the hell you where going through the daft mask you wore. 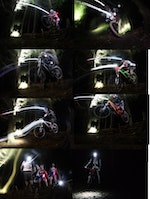 Since it was a Halloween special, fancy dress was mandatory. Twenty five riders turned up from far and wide for the 6pm mass-start leisurely hill-climb to timed stage number one. The Grim Reaper chewing the fat with Zombies and Skeletons, Werewolves talking tyres with Axe Murderers and the Monks pointing out how bloody hot and bloody stupid it was to ride in fancy dress.

After a forty minute climb and deep into the woods we reached the start of the first stage.

The Bible black night was intermittently slashed with the flash of white light as riders sprinted off the line at twenty second intervals. The chat had stopped and the race was on.

Julian “Panda” Poffley made the trip up from Swansea.

Martin “Werewolf” Astley set the early pace on the first stage with a scorching 6:42, 3 seconds up on Rowan “Bones” Sorrell with Rob “Howling Wolf” Breakwell back in third with a 7:01 in the wet and slippery conditions. Wild boar, rutting dear and the odd wandering badger also had to be avoided.

A thirty minute fireroad and single track climb led to a pine forest dual track and stage two start. Blind drops, wet roots and wet rocks probably made this the most difficult stage. Bones Sorrell blitzed it in a 4:48. Werewolf Astley punctured on the first climb so missed his start time. Game over for the fast hairy Bristolian. Race organiser Sam “Mad Monk” Jones banged in 5:20, 8 seconds up on Howling Wolf Breakwell, 5:28. These three were fighting it out for the overall. At the back of the pack, local lad and likely podium contender Gee “Skeletor” Gonzalez was struggling with no seat. Rick “PeterPan” lost his phone (later found with Endomondo), Vinny ended up in the bushes, Chris P got his antlers caught in the trees and the less said about Pete the better!

In the Monduro nobody can hear you scream. Well they can at the Bowls Club later. The off camber traverse on the final stage caught out more than a few. Photo:Steve Jones.

The final stage was the hardest, a long rooty traverse, short technical climb, followed by a 3 min muddy, twitchy, off camber descent

Bones Sorrell was unstoppable with a 7:40, Werewolf Astley made up ground after his puncture 7:42, Howling Wolf with an 8:11 (on one of the marshals bikes after snapping his chain) and the Mad Monk in 4th.

Jonny “zombie” Everett and winner Bones Sorrell tucking in to the shandy. 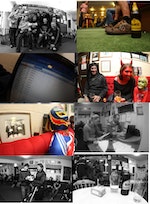 Knees up time down the bowls club.

So there we go. An amazing night of racing in the dark Welsh woods with a load of top people all out for some fun and games. The top three on the night were Rowan Sorrell, Rob Breakwell and Sam Jones.
At the finish line everybody had a story to tell of mishap and adventure, crashes and skirmishes.

Then it was back to the Bowls Club for food, drinks and pisstaking.

Big shout out to Sam Jones for organizing the event, all the marshalls for their help, Ali for cooking the food, Vinny and Rhi for the timing and everybody else who helped out. You knows who you are!

See you all at the next one.

You probably already know from all the internet gossip but… …we’ll still have to wait 24hrs for the official word! (We’ll have the exclusive news here...

A preview of the 150mm 2012 Giant Reign trail bike. Quick intro. Dirt Magazine’s bike tester Steve Jones has been given a challenge (like what Anneke...

You probably already know from all the internet gossip but… …we’ll still have to wait 24hrs for the official word! (We’ll have the exclusive news here...

A preview of the 150mm 2012 Giant Reign trail bike. Quick intro. Dirt Magazine’s bike tester Steve Jones has been given a challenge (like what Anneke...

Look what Dan White from Cube has just gone and done. He’s only just bloody brought us the first Two 15 in the country! I’ll keep...

This episode of Homemade Bikes crosses the Channel and features French engineers Cyrille, Bruno and their newly found company Home Bicycles. The Revolver The Revolver is a...