There are some mixed messages flying around at the moment about legendary suspension brand Marzocchi. Firstly from reading Tenneco’s (the company that owns Marzocchi) Press Release below it appears that the company has closed, the plug has been pulled… but from reading Marzocchi’s main Twitter feed it seems that it could be business as usual for the mountainbike side of things!

Marzocchi have been MASSIVE in the the lives of many of us here at Dirt, and of pretty much all mountainbikers… their Z1 Bomber fork from back in the day led the way. The company has been in trouble and has been up for sale recently, and it appears that no buyer has been found as of yet. It looks like the moto side of things will be shut, but from the Tweets there could still be life in the MTB side of things. We’ll just have to wait and see. Fingers crossed that a solution can be found. 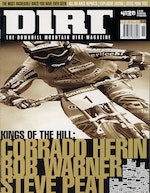 These actions are subject to a consultation process with the employee representatives and in total would eliminate approximately 138 jobs. Tenneco currently employs 127 people at the Marzocchi plant in Bologna, Italy and an additional 11 people in its operations in North America and Taiwan.

Tenneco intends to assist its motor bike customers with the transition of current production to an alternative supplier and expects to complete the closure by the end of 2015.

“We sincerely regret the impact these actions would have on our Tenneco Marzocchi employees, and thank them for their tireless efforts to improve performance and reduce costs. Unfortunately, it was not enough to overcome continuing market challenges in the two-wheeler business,” said Brian Kesseler, chief operating officer, Tenneco. “We are committed to working with our employees’ representatives, and with our customers to make the transition as smooth as possible.”

This intended action is a part of Tenneco’s ongoing efforts to optimize its Ride Performance business globally while continuously improving its operations and increasing profitability.

Tenneco is an $8.4 billion global manufacturing company with headquarters in Lake Forest, Illinois and approximately 29,000 employees worldwide. Tenneco is one of the world’s largest designers, manufacturers and marketers of clean air and ride performance products and systems for automotive, commercial truck, and off-highway original equipment markets, and the aftermarket. Tenneco’s principal brand names are Monroe®, Walker®, XNOx™ and Clevite®Elastomer.