What a thrilling final in the hot hot hot heat of Val di Sole, Italy for World Cup round #5

“Tonight’s gonna be a good night” is belting out of the Italian sound system as I type this and for Marc Beaumont that is going to be an understatment for sure.

Vigo 2007 was Beaumont’s last win, that one hinged on the weather, Val di Sole on the other hand was a fair and square emphatic victory on the roughest of tracks.

Mechanic Mark Maurissen and coach Steve Spencer over the moon with Slugger’s win. 57th fastest qualifier Markus Pekoll set the early pace at Val di Sole on a scorcher of a Sunday afternoon and sweated it out on the hot cushion for nearly an hour as 44 riders failed to beat his time of 3:23.55 seconds.

It wasn’t until Greg Minnaar banged in a 3:19.25 that Pekoll had to be woken up and asked to move, not that he could sleep with the banging Italian techno background choonz.
Minnaar’s time was two seconds faster than Gee Atherton’s qualifier from Friday giving an indication that it was something special.
Lehikoinen came in 11th, O’Connor went though the tapes but then Stevie Smith smashed in a 3:21.98 to give him his first podium in 5th.

Fairclough crashed before the first split. Steve Peat second at the speed trap and 4th at the first split stalled on a rock in the middle somewhere and lost a fair bit of time, but good enough for 6th spot with a 3:22.03.
Justin Leov was a DNS after suffering a big off in the mornings practise, reports are he’s had an x-ray but is up and walking about.

Just after half past three Marc Beaumont leaves the start hut and is just over a second up on Minnaar on the first split by the second Beaumont has stretched the gap to 1.5s and crosses the line with a 3:17.85, 1.4 faster than Minnaar.

Next man down Spagnolo bins it up top . Danny Hart who has been on fire recently has a slow top section but makes up time lower down to spank in a 3:22.14, 7th spot. Andrew Neethling has finally found the form he is capable of and clocks in a 3:21.08 just as the Italian DJ swaps his techno mix for some AC/DC.
Marc Beaumont is sweating on the hot seat and said his heart was beating faster than on his race run. Four riders to go, he’s guaranteed a podium.
4th fastest qualifier Josh Bryceland sets off a little too hot makes some mistakes and is 20th at the first split. He claws his way back on the bottom section and takes 9th “Bastard” reads his FaceTube status.
Aaron Gwin has been loving the sunshine, the dust and the track and it shows, P1 at the first split nearly two up on Beaumont. Then disaster, he bins it on a rock double and goes down hard over the bars. Gwin is back up and on the bike trying to salvage something, 3:25.52 just 7 down on current leader Marc Beaumont gives him 14th, in a crash that must have cost him over ten seconds.

Two to go and Beaumont is on for a silver at the very least. Sam Blenkinsop was hot favourite for a lot of folk here, and was more than happy not to have the pressure of being last man down. Still something went wrong and Blenki can only manage an 8th. Gee Atherton is the only man who can spoil Marc Beaumont’s second World Cup win, Gee is down at both splits and crosses the line 3rd. The mild mannered Slugger from Shropshire takes his second World Cup win since Vigo 3 years ago.
AC/DC is blaring, the crowd are going nuts and the GT team are ecstatic. Beaumont has been bobbling around the top ten always threatening to do well, but today proves that he can run at the speed with the top dogs. Great result. 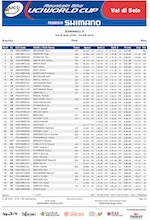 Gee Atherton leads the series by a slender 7 points. 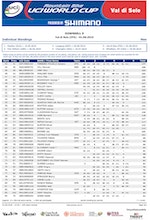 Ten of the best from Windham World Cup qualifying day through the lens of photographer Victor Lucas.

Photographer Victor Lucas brings us ten unique images from the first day of practise at the World Cup finals in Windham. After a couple of months...

Ten of the best from Windham World Cup qualifying day through the lens of photographer Victor Lucas.

Photographer Victor Lucas brings us ten unique images from the first day of practise at the World Cup finals in Windham. After a couple of months...

As you may know, we here at Dirt have exclusive access to the new Commencal Supreme DH frame. We are following the frame from the...

Five amazing slideshows from the recent Åre Bike Festival. Words by Richard Cunynghame In the latest issue of Dirt (#103) you’ll find an article I wrote about...