Film maker Tom Caldwell and crew have been flat out over the winter months working on the (soon to be) epic ‘A Slice of British Pie’. We are pretty excited about this film that features “all your UK favourite riders”. The premiere will be taking place on March 12th at Mud Dock Cycleworks in Bristol, followed by Sheffield (info here and tickets here) and Glentress (info here) later in the week. Here’s the full info. Be quick and get yourself a ticket if you want to be there. 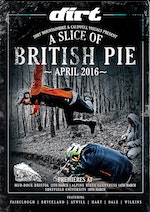 Mud Dock Cycleworks are proud to host the premiere of: ‘Dirt Mountainbike – A Slice of British Pie’

Produced by Caldwell Visuals and featuring the best of British in MTB, here’s what they had to say:

“What happens when you combine Josh Bryceland, Phil Atwill, Brendan Fairclough and a big old cherry pie? Add in some wintery British slopes and you’ve got yourself a slice of lunacy, a slice of what the hell just happened, and A Slice of British Pie.

Sit tight for 25 minutes of all killer and certainly no filler from some of the worlds biggest mountain bikers as Dirt Magazine brings you just a slice of the British riding scene as from Fort William to Surrey, the boys are out in force showing the rest of the globe how we do it in our muddy little corner of the world.”

Look out for a trailer coming SOON!
Free Giveaways from 50:01 & Burgtec!

Tickets essential as this event will sell out. Priced at £6 for entry only or £10 for entry and a Mud Dock Beef or Veggie Burger (Normally £12). This is the only south coast premiere with the other two in Sheffield and Glentress.

We will be putting together a local ride in the day – more details to come!

Is the Front Derailleur Dead?

Is the Front Derailleur Dead?

Is this the best looking race kit on the circuit?

Has the best just got better?