Steve Geall was THE name in dirt jumping scene for most of the Nineties and early Noughties, also getting good results in DH, Dual slalom and 4x.

His smooth style and silly amounts of skill led to him being on the cover of numerous mag’s numerous times including Dirt, gracing the cover of issue 28 with a fully extended superman. He’s been pretty quiet of late so we decided to catch up with him and see what’s going on. Dirt Issue #28, July/August 2001. The caption inside read: “Locals busting out at local trails-there’s nothing better. Steve Geall just upped sticks and moved to a new house and these trails are his local hangout. It can be said that he has these jumps fairly dialled then. Big superman over the big six”
Photo:Mark Noble. 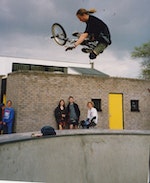 1. So Steve, you’re a bit of a dirt jumping legend in my eyes, one of the original guys to mix BMX tricks and style with a mountain bike. So what have you been up to? What projects have you got going on? Basically where you been?

Not really been up to much, still keep my eye on the MTB scene, loving all the Brits doing well in dh at the moment. Not stopped riding, still kick kids half my age arses haha. Been working in a bike shop as mechanic, the shops called GONE BIKING MAD, the owner Mark Hudson runs a cool little set up there, so all’s good. As for projects none really, there maybe a DH comeback…. watch this space.

2. Lets kick off with a big one, what happened to g-bikes that looked like a promising venture. If there was anyone qualified to make a dirt jump frames, it’s you, did it not appeal? Tell us the story.

What happened to g-bikes?…. The British economy shagged that, the tubing just got really expensive and it was just not cost effective to make them, shame really. I would have loved to have carried on with g-bikes with my dad John. While it was running we sponsored Grant n’ Ollie Fielder them boys gave us some good mag coverage, also on the newer frames Sam Johnson bought his awesome trail style to a lot of comps and trails in general… thanks boys.

3. So what does Steve Geall do on an average day these days? Still get out on the bike? Still jumping? Or have you moved onto other things?

On an average day it’s all about the bike shop, but after hours its out on the BMX, MTB and MX bike.

4.Do you remember the shoot for your Dirt cover, do you have it framed and on your wall?

Yeah I remember it, it was a bike test at Vallis trails in Frome, I was on my Orange Ms isle, think the other bikes were Mongoose and Kona? I didn’t know they were going to use it as cover shot, the same month MBUK ran an identical cover, so 2 superman covers in a month? I still have that photo in the portfolio, never framed mind you.

Ideal day is any day I can get out on a bike really, at the moment I’m really into my DH and MX bikes, but the MX bike is so fun, in a way I wish that I had done the motocross thing years ago, but I am making up for lost time now. 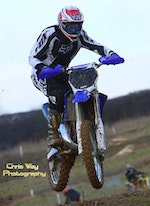 6. What do you think of the current dirt jump/ freeride scene and the ever growing popularity of street riding on mountain bikes?

The freeride / jump scene is nuts at the mo, what with Redbull rampage, Crankworx and all those events getting more air time on T.V. it’s only a good thing. The British riders are killing it in the comps, so that’s good motivation for the up and coming riders and from what I’ve seen there are plenty of them around.

7. Are there any big crashes from your career that you remember or are still causing you hassle?

Crashes…….. only a couple really, big one in Wales after 2 bottles of cider and Doc Martins on S.P.D.S… haha = broken collarbone, still gives me shit in the cold weather. The other was at Slovenia 2000 World Cup duel, slipped pedal before biggish double, over bars bike hit me in head, didn’t think anything of it got to the finish and all I could see was blood. I had split my head open pretty good. They loaded me in to ambulance that looked like the Pope mobile, that was the funniest part for me. Cheers Ed Mosley for picking me up from the hospital.

8. What bikes you riding these days?

9. What does the future hold for you?

The future holds a DH comeback, be afraid vets class!
Plus a whole lot more riding for sure, as well as working in the shop of course to fund this.

When it’s the middle of winter and there is a metre of snow outside, what do you do? Well, here in Finland we get off...

Martin from Hotlines has just this very minute dropped off a Ghost NorthShore fresh out of Germany. I’ll be honest and say I was on the...

Filip Polc has won the craziest downtown race in the world, the Valparaiso Downtown event in Chile. Fraser Britton was at the scene and has sent...

When it’s the middle of winter and there is a metre of snow outside, what do you do? Well, here in Finland we get off...

Martin from Hotlines has just this very minute dropped off a Ghost NorthShore fresh out of Germany. I’ll be honest and say I was on the...

Filip Polc has won the craziest downtown race in the world, the Valparaiso Downtown event in Chile. Fraser Britton was at the scene and has sent...

As we must have said a million times now, the introduction of the 10 speed 11–36 ratio cassette has meant that for the vast majority...

Video: A Summer in Whistler

A group of guys, one summer in Whistler, a road trip to Mt Washington, Silverstar + Sun Peaks, Crank Worx, Canadian open and a last...

Video: A Summer in Whistler