We have a quick catch up with 1997 Dirt #04 cover star and super talented rider Tim Ponting and find out what he’s up to these days. 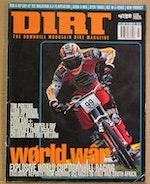 For those youngsters who might not know who you are, tell them who is Tim Ponting?

I came from an MX background and started riding MTBs back in 1998, entered my first x-country race at Margam park in 1990 on my Dawes Fatchance, then started racing DH in ’93 when the first UK DH races started on a hand painted Kona! I joined the Animal team in ’96 and went full time racer in ’97 when Animal went big with their sponsorship. I rode for the Animal team for another fun filled 5 years. I won the NPS Elite DH series 3 times, been National Champ and 3rd in the European dual slalom champs. My last years of racing saw me ride for Giant and Tomac bicycles picking up two silvers and a bronze at the Masters World Championships.

Good golly, it was 1997 when that photo/cover shot was taken, what do you remember about the Nevegal race?

Wow! It still feels like the other day turning up at that race! This was our first world cup race for the Animal team and we turned up looking factory in our awesome team van that Steve Kitchen (Animal team manager) had sorted out.

We walked the track and just couldn’t believe how rocky and technical it was!
We were one of the first teams to have the new Mr T triple clamp forks (…I can still remember sprinting into a pile of bricks to test them out to see how flexy they were, they weren’t!!) We were going to need them on this track! I think I came 31st in the race and was kind of gutted but looking back it wasn’t too bad on our giant x-country frames with 3in of travel! We just hadn’t raced on anything like it. It was so different from sprinting around the new forest! 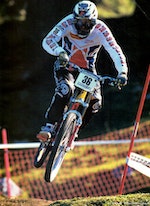 How was it racing the Grundig series that year?

The Grundig series was awesome! I was so lucky to be able to race it. Travelling around the world seeing new places and meeting so many similar people who loved riding bikes was amazing and getting paid for it! We had so many Brits racing too, which made travelling between races full of fun. I made so many good friends and really miss traveling around the world with people like Peaty, Pager, Will Longdon, Paul Plunkett, Gilly, the Kitchen brothers, Nigel Stonebridge and the new TV celeb Rob Warner, we had an awesome time!
I can honestly say I enjoyed every single minute and never took it for granted.

When did you retire from competitive bike riding?

I stopped racing DH around 2003 I think! I wanted to go do other things and ended up cycling across America with my then girlfriend Jo, It was a great trip!

Do you still watch/follow the World Cup events? How do they compare to the Grundig races?

Yes I keep up with the world cups on Eurosport, especially now the commentary is better! Problem is it just takes me back to the good old days and I just want to go ride my bike every time it’s on!
I’m not just saying it but I can’t wait for Dirt to come out each month too. It’s the only mag with proper race coverage and the pics are inspirational, it’s the mag for racers!

I don’t think the World Cups and Grundig races have changed that much as in sponsorship and TV coverage but I think the main difference is the depth and quality of the riders.
Nowadays, it seems you have to be really on it to get anywhere near the top 30 as the times are so close. That’s why I so impressed with my old mate Steve Peat who keeps hanging on in there! The guy is awesome and I’m glad he’s still in the sport to show all the young up and coming riders what commitment and professionalism is and what it takes to be at the top of your game… Until he gets to the bar!

So what are you doing with yourself these days?

I’m into everything at the moment. I have a bet with Lewis King that when I’m 40 (which is next year!) we are going to do an Ironman together! I’ve been racing triathlons for a couple of years now and raced the UK half ironman (1.2 mile swim, 56mile bike, 13 mile run) this year! It was really tough! Double the distance is going to be hard! I’ve also dabbled in BMX and extreme enduros. Do you still get out on the pushbike now and then? I heard you raced the National Champs this year?

Yes I still ride as much as I can. Family life, work and my 3 year daughter keep me busy! My good friend Chris Porter from Mojo has helped me out with a DH bike this year and I managed to get to two races this year. It was great to race DH again, I really enjoyed it! I think I got the biggest stiff back award though!!

Have you considered racing these Enduro events, they look right up your street?

Yes I would love to race more of those. I raced one a few years ago up in Kielder.
I really enjoyed riding all day. You have to be a good all round rider.
I have so many things on my list of things to do; it seems to grow all the time!

The BC bike race, a 7 day race across British Columbia and the trans alps is right up there. I still haven’t raced the Mega yet too. Chris Porter has just raced the Trans-Provence, that looks amazing too!

You used to race a lot of MX back in those days do you ride much Braaap these days?

I haven’t raced any motocross since the thumper series when I rode over Warner’s head and ripped his peak off! He wasn’t happy! It still makes me laugh!
I’ve been racing enduros for quite a few years now. Went down to Erzberg and raced that! (Ed: Google Erzberg…it’s nuts!) Karl’s diner finished me off! I will be back to finish it one day. Maybe!

Raced the Tuareg rally in Morocco this year. It was the most amazing adventure ever! An 8-day desert race, 400 km a day, starting at the top of Morocco, down over the Atlas Mountains, into the Sahara desert and back again!
I was really lucky to do the trip with Chris Porter who has raced it for a few years now and he dragged me along. With out him I would be lost in the desert somewhere!

There’s a great interview with you in that issue from 1997!
Can I ask you some of the same questions?

Do you think there is a young lady about to come on the scene and ruin it all for you?

Yes, a young lady did come on the scene and ruin it for me! Then I married her!
Just kidding, she might read this! I’m married to Jo who also on the Animal team for a year but she was more interested in getting all the free clothes than racing!
She went on and raced with the Halfords team after that. It was great travelling around all the races together. She still rides for fun now when she has time.

Are you gonna live abroad eventually?

Yes we still are looking to move abroad, Canada actually, maybe Alberta or BC? We applied for permanent residency in Canada but got turned down. Jo is in her final year of a physiotherapy degree which will hopefully help us get out there.
I’ve been working for Southern Electric as a linesman for the last 7 years building overhead power lines. Hopefully I should find work out there doing that.
If not maybe I can get a job in the mountain bike industry. I would love to work for a company like Norco out in BC who seem to have a real passion for the sport, or maybe just trail building on the side of a mountain will do.

Thanks for your time Tim and good luck for the future, any shout outs?

Yes I could write a big list here but to keep it short, I want to give a big shout out to all my old Animal teammates from over the years (Steve and Robin, Gilly, Guss, Minnaar, Martyn Ashton, Adele, Kev, Bostock, Revs, Raf, Emma Guy, Glynn O’Brien). I haven’t seen a lot of them for a while especially boss man Steve Kitch. Steve and Lester from Orange, it was great working with those guys. Woody from Hope and Chris, Sue and Tim from Mojo for all there help and support over the years. It would be great to plan an Animal/ Orange team re-union, pull a few stunts and wheelies like the old days (and the kerb test, exclusive to team Animal)!

The Atherton’s, well Dan in particular, have been super busy digging an amazing backyard playground! If you’re an avid Atherton Project fan you will have seen...

The Atherton’s, well Dan in particular, have been super busy digging an amazing backyard playground! If you’re an avid Atherton Project fan you will have seen...

Welcome to the Jungle! Have a gander at this amazingly manicured patch of dirt jumping paradise that they call The Jungle We saw this video a...