Darren Roberts from Peak Performance Fitness has just fired us the third part of his excellent series about the recovery of Dan Atherton from his shoulder injury. If you missed parts one and two you can catch them here and here. Darren is also working with Dan’s team mate Taylor Vernon after his serious back injury, you can check that out the first two parts of that story here and here. 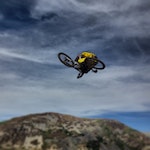 Dan taking it easy down at the quarry.

So here we are 10 weeks post op with Dan Atherton – and I think it’s fair to say we’ve had a ‘reasonably’ successful rehab phase! It hasn’t been easy, no injury is easy to deal with and the work that Athy has had to put in has been considerable. He had some significant tears which needed repairing – however it is extremely satisfying as a performance team to have such a positive outcome so far.

Stitched up tears in Dan’s shoulder.

It’s worth underlining though some key points as to how we got to this point; Dan training with pro skateboarder Kohran Gayle the day before his op.

Team fitness coach Alan Milway has worked alongside me every step of the way with Athy. This meant I was able to simply provide over-arching goals while Alan filled in the detailed sessions. I was able to sign Athy off for the types of movements and work he could do, Alan running with that in the detail. Having a great S&C coach like Alan delivering the weekly sessions with Athy was integral to his fast recovery.

Dan had done all the hard yards with therabands, low resistance work and pool work – so returning to some strength work and high intensity was a welcome change in the programme. Pushing things as we do, you have to be careful that you’re not creating compensations elsewhere. His left shoulder constantly wants to ‘hitch up’, which if left unchecked turns into neck, back and even more shoulder issues – he’s had enough neck problems in his career! Whenever you work at the margins of your ability, technique and form slip, this is even more important to watch for in this rehabilitation phase. If you allow technique and form slip too much, you’ll be creating problems elsewhere.

Trunk strength is vital for all athletes – you can’t fire canons from a canoe!

It’s easy for the athlete to think they’re a lot further on than they actually are – so unilateral work is vital to ensure both sides are working as they should. With such a significant trauma to the shoulder not only from the dislocations but the operation itself, proprioception work is also vital to the recovery process. Proprioception refers to how well you are aware of where your body is. When you walk upstairs you don’t need to look at your feet to know where they are, you have a ‘sense’ of where your feet are in relation to the stairs. The more highly trained you are, the more developed sense of body awareness you tend to have, however injury can massively affect this – so it’s not just about fitness or strength. Training your body to ‘learn’ where a particular bodypart or parts are without looking at them is integral to not only rehabilitation but any training. In Athy’s case, if his brain isn’t 100% sure where his shoulder is when it’s being moved around by his arm when riding a bike – this causes the muscles to either overwork or not react as they should. Either way, this can lead to further injury and problems. 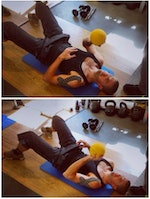 Proprioception work, on both shoulders

Each injury is unique, and individual to that athlete. Athy could injure his right shoulder in exactly the same way and we could follow a very different treatment path and outcome. As I keep mentioning, this massively accelerated recovery process was under the strictest of supervision with a professional athlete who knows their own capabilities. Right now Athy is at the transition phase of being returned to sport/competition. At this point a footballer or rugby player would be looking at some time in a reserve game before playing a full reserve game. Then onto some time in a first team game before playing a full game. With action sports athletes we don’t have that facility, but we can choose certain races and events for them to test themselves out on, if available. The danger is they want to win, they only know how to go flat out – so managing their expectations and enforcing it as part of the rehab process is always difficult!

It’s obviously great to see Dan back on a bike, it’s required a huge amount of hard work and attention to detail. We’re also not finished yet, this process is not over until Dan crosses the finish line with his left shoulder intact – a race will be the ultimate test.

In the final part of this story – Dan returns to racing…..

Two flips on a downhill bike? Yep, front and back from Bizet

Two flips on a downhill bike? Yep, front and back from Bizet

Wyn Master pinning it down the Asia Pacific Downhill in Bali.

It’s Friday and that can mean only one thing.. Friday Random time.. http://www.youtube.com/watch?v=l6JkMVghTvI I’d take my hat of to this dude, if I was wearing a hat...