Will “Shaggy” Wells rocked up to the CoreBike show at Silverstone earlier this week to have a snoop around, here’s his pick of the products.

The 2011 CoreBike show had some hidden gems once you’d waded through all the fixed gear nonsense. The theme of the show seemed to be headsets, wide, flat bars, chain guides and ridiculously light wheels. New bikes with freewheels were unfortunately very thin on the ground.

Cane Creek exhibited a typically comprehensive selection of headsets, but rather than the usual showing conventional, zero stack and integrated styles, they were displaying some neat problem solvers. One of the most interesting of these was the Angleset, allowing you to alter the head angle of bikes with onepointfive and certain tapered headtubes by 0.5, 1.0 and 1.5 degrees. A really neat feature that can turn a minger into a winner.

Cane Creek’s other ace up their sleeve was the new excitingly named EC44/52, which lets you run a tapered fork in a zero stack 1 1/8″ headtube, it does so by utilising the 44mm “internal” lower headset fitting but by moving the bearings outside the frame you can squeeze in the 1 1/2″ lower race. As of last year’s CoreBike, Cane Creek are still allowing you to mix and match between the various types of upper and lower headsets. Basically, if you have a headset related head-scratcher, Cane Creek probably have the product for you.

Hope are now also offering “pick ‘n’ mix” on all of their headsets, you order your upper and lower headsets individually and they come packaged separately.

Just spoke to Neil from Hope and in fact YES they do the external 1.5″ headset.

It turns out that flat bars aren’t just for people with a fetish for shaved legs and tight shorts, nearly every company is offering a tough, wide, flat (or very nearly flat) handlebar.  What was not so long ago considered downhill width is now considered narrow for all-mountain. Here’s a monster from FSA: 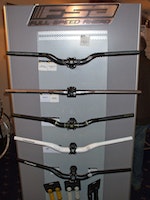 Some adjustable ones from ODI, and I don’t mean getting the hacksaw out.

The bar that made me take more steps back to photograph than the rest was RaceFace’s Atlas FR at a whopping 31″ wide, try putting bar ends on that!

Also from RaceFace were their rather attractive offerings aimed at everything from XC racing to all-mountain. Dubbed the Turbine, it effectively replaces Deus although RaceFace were keen to point out that Deus was only aimed at XC racers, not trail warriors as the Turbine range will be. New products include 28″ wide flat and low rise bars, a very familiar looking stem and some equally stunning cranks in two-by and three-by configurations in 9 & 10 speed. Cranks are available in standard and ‘SL’ versions with a Titanium spindle.

The range has a more CNC’d look than Deus ever did, it’s nice to see more classy mountain bike kit on the shelves. RaceFace were unapologetic about the fact that they have their sights set firmly on the Thomson market. Oh, and the 2×10 crank is lighter than Sram XX and is rated for all-mountain use. This stuff has gone straight to the top of my trail bike wish-list.

With the advent of affordable mountain bike 10 speed, brands are scrabbling to produce the lightest or blingest one-by chain device. MRP, the creator of the original trail bike one-by guide have two new models for XC and trail bikes, here’s the version of the original 1.X that uses a front derailleur-type clamp for those with press-fit bottom brackets (a direct-mount version will be available later in the year).

The other new guide from MRP blurs the line between trail riding and downhill. The Lopes SL has the same upper cage as the 1.X, but with a lower roller for extra security and chain silencing, it’s designed to be run without a bash guard so isn’t recommended for those who regularly whack their taco’s. Ideal for super light DH builds, as well as 4X and all-mountain riders. Lovely bit of kit. DMR were offering something very similar in the form of this, the Viral, available in ISCG’05 and BB mount. The clever thing about this is that it can be bought in two stages, upper and lower separately, this means if you want to run an XC 1×10 and fit something more robust and secure for uplift days you don’t need to buy two chainguides. The guides will be available in black or white, the upper plate will be available in a load of anodized colours too.

Creating quite a stir was Hope’s prototype XC chain device and crank for obvious reasons. That’s a Hope chainring too, available in 30-40 even tooth options, three aluminium bashguards are also available in all the usual colours. E.Thirteen have released some cheaper steel-backed versions of the venerable SRS+ and LG1+ chain devices named the SS+ and LS1+ respectively. Top performance and nearly-there weight without the price tag.

Easily the star of the show for me was the new Easton Havoc wheelset. Designed for racing world cup level downhill, featuring ‘normal’ spokes and a UST rim, these babies weigh in at an XC-worthy 1750 grams. They are handbuilt in the USA, are available in 20mm only up front and 135/142x12mm rear. Hubs come in grey or orange, but you’d have to be mental to get grey. 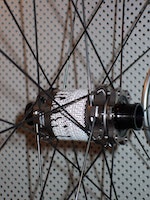 You’ve probably seen the Easton Havens, very pretty in the flesh, but at only 100 grams lighter (in aluminium) than the Havocs it seems hard to justify – until you’ve seen the matching finishing kit.

Maybe the Havoc finishing kit is more to your taste? Suit you, sir. 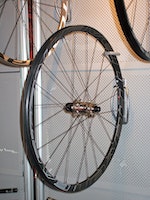 Look away now if you have the best part of £2,000 burning a hole in your pocket, or if you don’t for that matter.

OK, 2 big’uns does sound like a lot of money for a pair of wheels (and let’s be fair, it really is), but by all accounts, these rims are indestructable. You get a 2 year, no questions asked warranty and I quote “even if you reverse over it with your car” the rims will be replaced free of charge. It doesn’t justify the cost, but it does soften the blow, ever so slightly, like a pillow on the front of a runaway train. On a much less obvious note, Sapim have launched or are in the process of launching a new spoke called SuperSpoke. It’s stronger than a CX-Ray, currently the strongest spoke on the market, by about 20%, a very big deal, but it’ll also save you about 50g per wheel. The CX-Ray doesn’t get much press as it is at the moment, so this will probably fly under the radar, it could end being one of the best kept secrets in mountain biking.

Intense have the lovely new Tracer 2 in CanAm yellow, it has a new asymmetric back end with fancy new bearings that are better for some reason or another. Travel has gone up from 140/150mm to 150/160mm. This bike was mind bogglingly light. There’s an M9 in the background but you’ve already seen that, it does now come with an Angleset and a Double Barrel as standard.

Info from Stikman at Intense: “The bearings have not changed and is not what we are excited about, it is the redesign of the lower pivot bolts that is the new change. It is an ez-lock collet type of system that is an easier system for maintenance, along with new grease fittings in the frame and swingarm at those areas. So, same bearings, but a whole new way the link is assembled.”

If it ain’t broke… The thoroughly excellent and often forgotten Cove Hustler gets nothing more than a new paint job for 2011.

If it is broke… The 5 spot finally gets the slacker head angle it deserves, head tube is now a zero stack design so tapered forks or a lower stack height are on the cards. Still uses bushings in the suspension though…

On the subject of slack head angles, Turner have re-designed the Sultan, their all-mountain 29er, travel is 120mm, fork travel is 120-140mm, it has the same head tube as the 5-Spot, but most importantly it has a 68.5˚ head angle, 29ers generally have head angles in the region of 2˚ – 3˚ steeper than their 26 inch equivalents to compensate for the increased trail so this bike is clearly designed to be thrashed! Identiti were showing off 2 new offerings, the A.K.A. hardtail designed for all-mountain riding… …and their new downhill prototype that as of yet has no name. It has 7.5″ rear travel and a 66˚ head angle. Projected retail price is between £1000 and £1,200. Hopefully the head angle will be sorted by the time it gets the go-ahead…

DMR were showing a couple of interesting new frames, the Bolt, which has been redesigned with more trail-oriented geometry. It still features a concentric bottom bracket pivot, travel has gone from four to five inches. DMR had 2 example builds on show to demonstrate the versatility of the frame’s design, one with singlespeed and Dirt Jumpers, one with 1×9 and Fox 36’s. Frame weight is a shade under 9 pounds so it’s no featherweight but that shouldn’t put off potential and existing DMR customers, especially when £899 gets you such a finely crafted frame. If you like your Trailstar but your knees are asking for a break, this is the rig to buy.

A neat feature of this frame is that the chain guide moves with the swingarm, keeping everything nice and quiet. The other new bike of note was the Omen, designed purely for 4X racing, it’s made from Tange Infinity and it comes in red like a Ferrari so it’s obviously going to win a lot of races. The complete bike comes with a Marzocchi 4X fork, Upgrade’s own Microshift gearing, Tektro Draco brakes and DMR wheels and finishing kit for a more than reasonable £1500. Both bikes look like they could be absolute bombers and are aesthetically amazing.

DMR were also debuting some new pedals called the Vault, designed to run alongside the love-or-hate V8/V12 range. The platform is massive, very thin and features an new pin system called Flipins, which have a smooth edge on one end and a sharper edge on the other, enabling you to tune where you want grip and slip on the platform.  A titanium axle upgrade is also available.

…but with the titanium axle upgrade, amazing.

TSG’s Superlight is another product that after being the first of its kind has managed to remain the best. It took the traditionally weighty piss...

Harry Molloy and Manon Carpenter will spearhead the six man Madison Saracen race team which will race World Cups and the British nationals. The full team...

Last year we said we thought the styling of the D3 might be a bit of a grower, and grown it has done…favourably. The reason...

TSG’s Superlight is another product that after being the first of its kind has managed to remain the best. It took the traditionally weighty piss...

Harry Molloy and Manon Carpenter will spearhead the six man Madison Saracen race team which will race World Cups and the British nationals. The full team...

Last year we said we thought the styling of the D3 might be a bit of a grower, and grown it has done…favourably. The reason...

It was back in July 2010 that No Fuss Events announced the Macavalanche. “A little brother or sister to the world famous Megavalanche” was the...

Cam Cole won the New Zealand National at the weekend in a time of 2:58.13 nearly two seconds up on 2nd place George Brannigan. The top...