More Backyard Rampage action for you here, this time from a steep hillside in Chile.

Bryn: “At the end of 2010 I was down in South America working in Chile building mountain bike trails for a New Zealand run outfit. Having just come from a Canadian summer where I had been hitting some decent sized jumps in the Loops and Whistler to the back of beyond where we were just building trail bike tracks rather than downhill runs, I was feeling a few withdrawal symptoms and decided that something had to be done.

I picked my spot and began digging after work one afternoon and 3 days later my innocently small sized stepdown morphed into something quite different as you can see from the attached photos. For reference the takeoff is the patch of dirt behind me and the landing is at the bottom left corner of the photo where the second track runs across (supposed to be landing here).

I got all the boys out there one day on the way home from work and decided that it had to be done. Putting some kneepads on qualified as protection and the half-nut (xc helmet) topped things off. I gave it a run in and asked the boys what they thought: “give it death and hang on, you probably need more speed” was the response.

Ok I thought sitting at the top, I’ll go fast, what’s the worst that can happen. Well ten seconds later flying through the air I knew I was just about to find out as I came up about 3 foot short and promptly exploded as you can see in the video. 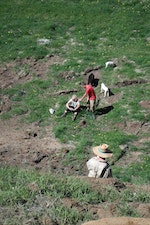 The aftermath from this was a cracked frame, but not in the usual way, when I landed my hands blew off the bars, chest hit the stem and that broke 2 ribs, my balls then hit the seat so hard that the seat actually snapped in two, rails and all and the seat-post got mashed into the bottom of the seatube and hit the little weld that prevents it from making mashed potato out of the shock shaft and put a 2cm long crack in the seat tube. I spent the next two days in bed and then went back to work on the 3rd day once there was no more blood in my pee, it had mainly stopped coming out of my nose and flem and it wasn’t too painful to walk.

Because of this I was given the term “loco oveja” by the Chilean workers which means crazy sheep.

I never got another chance to hit it despite my best intentions, but maybe one day I’ll go back for another hoon.

Send all your Backyard Rampage stories, photos and videos to Billy

Dan proves that he's still more than capable of taking a win on a DH bike...

Epic scenery, a great story, and a chance to win some Five Ten shoes! What more could you want?

Dan proves that he's still more than capable of taking a win on a DH bike...

Epic scenery, a great story, and a chance to win some Five Ten shoes! What more could you want?

And now for something completely different: Cyclocross

Dirt contributors Rod “Rodders” Fountain and Steve “The Butcher” Walker had a go at this Cyclocross lark and discovered it was a bit bloody difficult! The...

And now for something completely different: Cyclocross

If you liked the Trans-Provence then you're going to love this, it's a new French Enduro adventure!