Aaron Gwin reset the history books here in Italy with a simply mind-blowing run that eclipsed a run by Danny Hart that was wild, brave and every bit as gripping as Sam Hill’s run here a few years ago.

Gwin, on the carbon Trek just seemed composed, smooth and riding at a tempo that now has even the top riders some way back scratching their heads. This was his fifth win out of seven, and having taken the series last weekend now goes gunning for gold at Champery. Few will doubt what he can do on a similarly steep Swiss track.

The sun is shining here in Italy and the course was dry dusty fast and wild. Last man down Aaron Gwin has just crossed the line here at the World Cup final in Val-Di-Sole to take the series win he deserves after and outstanding year but also taking the win on the day.

The course was the most brutal we have seen this year both on bikes and riders and there were a few riders caught out in qualifying leaving them with work to do today but also some young guns putting in top times as well. The race was no different.

In the men’s event, due to troubles in qualifying riders like Steve Pete and Greg Minnaar were off mid pack so quite early. Greg held the hot seat for a good while just pushed back by Cam Cole. Jack reading was up there with a great 12th place qualifying spot but crashed out in his run. Cam’s time held for a few riders with a lot of guys just not being able to keep their pace for the full run and laying the bike down or making Mistakes putting them just off the pace.

Gee came down 5th from the end and took the hot seat with a time similar to Gwin’s form yesterday which looked hard to top. Troy came down with a great run but couldn’t quite knock Gee of the hotseat then Danny Hart killed it, getting a bit wild in customary style on the last corner but took the lead.

Steve Smith was out with an injured ankle from this mornings training so that just left Gwin as last man down. True to form this year with no dramas Gwin was consistently up at both splits and came across the line 1st and 1st overall. The man is a machine.

So, a great final to the series after a top years racing. Bring on World Champs in two weeks. On his current form you would be a brave man to bet against Gwin winning any major race this year. But I know a hand full of guys are proudly doing just that and will be fighting hard for the win next week so it will be an amazing race. 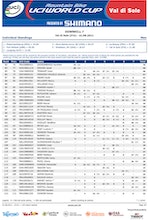 We’re a bit late with this one, but it’s defo worth waiting for! While we’re waiting for the World Champs team edits to come in,...

We’re a bit late with this one, but it’s defo worth waiting for! While we’re waiting for the World Champs team edits to come in,...

French rider Myriam Nicole has just taken a stunning win here in the last World Cup in Italy overcoming what appeared at the time to...

You lucky lucky people! Here’s an extra super bonus video from Saturday DH practice at Val di Sole! The Parkin Bros are turning up the heat...