UPDATE: We got more snow now…

Mother nature has delivered us a few flakes of the white stuff so I thought it’d be good to get a gallery of snowy photos up from around the country/world.

You got snow? Send your white fluffy photos to Billy

4X action in the snow 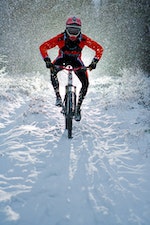 Daniel Irons with a short film that he made on the Black Canon Collective trails in Wiltshire over the weekend. Martijn Verhoog : “After a morning of winter digging we had quite a nice trail here in the Netherlands. The next weekend we had to test it with some snow. It turned out quite challenging as you can see.
First run, all went well.Second run, pushed a little too hard!”

One tube of “Snow Magic” can do all this…amazing stuff! Greg Wylie: “Got my Isuzu Trooper stuck whilst out snowboarding on Dartmoor. We’ve had a couple of feet in places, went out on the bike and it was a right twat so took the board out instead. Had to leave the car overnight so gonna head back up today with a mate a dig the fucker out.”

Greg Turner: “This was on Friday in the Surrey Hills before all the snow on Saturday. It’s me riding but my mate Adam did all the video editing and the ‘cinematography’. For an engineering graduate working in the financial services industry, he’s way too creative!”

Conrad Taylor: “The snow came down on Friday night so the next morning the old man and I hit
the trails in icy Mid Wales.”

Andy Mortimer: “I know there’s no biking action, but it was a bit out of the question with around 18″ of snow up Glen Fruin. Did some snowboarding instead.” Gareth: “Some photos of riding in Stoke woods Exeter….yep Exeter! I was the first person to ride the track and saw no one else the whole day, awesome. It was about 1.5ft – 2ft deep. Loads of grip in the fresh snow, but hard work to get any speed! The picture of my bike….its only held up by the snow….honestly!”

Greg Gilfillan: “Just some photo’s of mine and my mate Andrew’s bikes after a cold day at the local spot called Braefoot. This was taken on the way home just after I got loose on a sheet of ice which I thought looked “fun” but it resulted in a big lump on my knee. It was taken when the snow was starting to thaw out.”

Mojo Suspension owner Chris Porter gets SLIDEWAYS. Tom Wheeler says: “Its always a good day when you get to film your boss getting loose on his bicycle.”

Pete Hughes: “Some fun riding to be had in loose powder! Here’s some pictures from Sunday.
And an early Merry Christmas!” Jack Beckerson: “Here’s a snowy pic from a weekend ride. South of Guildford, me and my brother won’t let the snow get us off the hills!” It was so cold at DirtHQ this morning that my van went back in time, then it snowed and we all got told to go home before we became trapped…still needed a tow though-Billy.

Short messing around video from riding at a local pumptrack yesterday, but in the snow.

Shot on a Canon 7D with 50mm prime lens.

Micky: “Here’s one from my local track near Southampton,hope you like!!”

Stunning shot from Ian Linton on a ride at Innerleithen on Sunday, Ian says you can’t get up there now as another foot of snow has fallen. 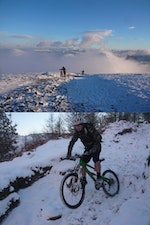 Chris Weir from Cumbria says: “Here’s a shot of my mate Adam Nolan riding in Borrowdale on Sunday, and a nice snowy scene nearing the top of Skiddaw on Saturday. It was howling an Artic gale up at the summit, but the views were unreal for England.”

Alexander Kennedy and the gang just North of Glasgow on Saturday night.

Chistopher Gallagher from near Edinburgh who says the snow is about 2 foot deep.

Yvan Bordis in the Pyrénées. Mark Forrest and his mates had the honour of christening the virgin snow up at Golspie, this year they were the first at Innerleithen. Checkout Mark’s photo on Flickr. Sami Korhonen, Turku, Finland: “…from a session week ago in Turku, since these shots, it has snowed a few more inches ”

I don’t often post pictures of me on the web, but this is the only photo anybody took from Friday nights local-mates-race night enduro series in the snow.

Rowan Sorrell organised this race (and won it). Round one, organised by Sam Jones (2nd in Ponty), was the Mon-Duro in Monmouth, this race,round two was in Pontypool so got the name Pon-Duro.

Three downhill timed runs and two massive climbs on a freezing cold night with snow and ice on the ground absolutely nailed me and I came last in just over two hours I think.

This photo was the finish of the last stage and I was so weak and cramped up I couldn’t move…bloody good fun though. Hope to get more photos from the next one.

Jonathan Wilson, Crieff, Scotland: “Here are some pictures of my On One 456 carbon in the snow, it was too deep to ride and its started snowing again!” Russ Martin: “Couple of shots of me in Mousehold Heath, Norwich,Norfolk on my Iron Horse (trigger) what hills we do have we make the most of.”

Russ Clark and the Live to Ride crew sent over episode 3 which sees the gang hooning about in the white stuff then sessioning the...

A landmark event happens this Sunday. As Tim Ceci once said, it is a case of “back to the future” for bikers in Queenstown, as...

Rob Cole and the crew have been super busy with the spades and machines building a brand new bike park, Esher X, in North...

Russ Clark and the Live to Ride crew sent over episode 3 which sees the gang hooning about in the white stuff then sessioning the...

A landmark event happens this Sunday. As Tim Ceci once said, it is a case of “back to the future” for bikers in Queenstown, as...

Rob Cole and the crew have been super busy with the spades and machines building a brand new bike park, Esher X, in North...

If ever there was any doubting that Renthal couldn’t take their legendary skills of making MX bars and put it to good use in a...