It may only have been an innocuous advertising shoot at the time, but something about this 2003 session stuck with us.

Raw, in close to the action and a sh*t load of fun, it really sums up everything Dirt stands for. It was the brainchild of photographer Paul Bliss and Hotwheels freelance design, marketing and team management guy Nick Larsen.

Bliss was well known in the industry for his love of ‘dressing’ a shot. He would bring along specific items (in this case a retro open-faced helmet and mouth guard), make sure the riders were wearing the right shoes, clothes, etc. He would also create scenarios, in this case tons of earth mounded up outside an industrial unit to make a kind of urban berm. We loved the resulting shot so much that we put it on the cover of our 20th Anniversary book.

Larsen remembers it well, “This was really a Paul Bliss idea for a GT ad that I wanted to run. Early in the morning we dug dirt onto a wall on the then new Hotwheels Warehouse, and just shot that one image all day. Paul knew the shot, and we focussed only on that. The riders felt awkward in those old BMX lids and mouthtraps and must have ridden that wall ride more than a hundred times. It was dark when we left, and as was often the case with Paul (and particularly then still working with film) he was unsure as to whether we succeeded. But as is always the case with Paul, attention to detail and perseverance pays off. Amazing work.”

2003 was a seminal time for Dirt, we started our first ever race team (with our own Steve Jones as one of the riders), brought Alex Rankin on board to start on the Earthed series of films for us… Dirt and mountainbiking were booming.

The two riders in the photo were Rich Batey and Andrew Rendell (Ren). We managed to track down Rich to get a few words from him about the day and the shoot:

When and where was the image taken?

The photo was taken on an industrial estate, about thirteen years ago. It was on the side of the Hotwheels/GT warehouse building, on some waste ground just off to the side of the car park. I remember a slight uphill run up, its probably a smoking shelter now.

What was the story behind the day?

The idea of the photo at the time was to get a racer and a dirt thrasher on a turn/wall ride at the same time. Andrew Rendell was wall riding the wall while I was cutting in on the inside over a mud hump that Paul Bliss had built so we could get the bike drifting.

There was hardly any dirt, just a small, loose pile up against the unit’s brick wall. It was a tight turn to get two people on at same time. I am sure we ended up laying on each other a few times trying to get the shot.

GT bought 40 fags, Pizza Hut and KFC dinner for us all, which was nice

I think GT and Hotwheels chose us because I was doing a bit of 4X, BMX and downhill racing, and Andrew because he was a hardcore trail thrasher. GT bikes had a model of bike at the time that did it all, so they lent us the bikes. They also paid for 40 fags, Pizza Hut and KFC dinner for us all, which was nice.

his was taken the day after I had raced 4X on the Sunday, so was pretty worn out. I remember it seemed like a long day, I was probably a bit hung over too.

On the way home, Wilson at 35 bikes, who was driving and had been racing with me and also did some shovel work for the shot, fell fully asleep at the wheel, which was scary but pretty funny at the time. It was a rad couple of days.

The day after this photo shoot, I remember I got a final written warning at work for unauthorised absences. I had the following Friday off after this to go to a race and, as a result, lost the job. This cover shot has now more than made up for that loss, even if it is some years later. 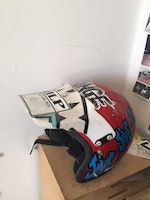 The helmet was pretty cool, something from the 80s, way before my (bike on dirt) time, probably older than me. Paul Bliss brought the helmet with him as a prop for the day. It was an old skool open face BMX lid, with mouth trap flapping loose. It was Will Smyth’s (Dig Mag editor) helmet with a Joffa mouth trap, Oakley half mask, stickerd up jive crew.

Fringe is my older bothers new romantic band from the 80’s (that’s when I stickered this up!)

Did you ever expect to get on the cover of Dirt? Or in particular, 20th Anniversary book?

When did you find out you were on the cover?

I only found out just after it got posted on Dirt Facebook page. I was just having browse on a break at work and it popped up.

Will this go in a frame?

Yes, it will be framed, I have almost every issue of Dirt mag saved, and my collection is now complete. The World Champ flexes his muscles