The northern ‘dynamic duo’ of Baybutt and Hamilton check out the latest brand on the trails, Sheffield’s Airdrop Bikes.

Having spent your entire life dreaming of and working towards a goal takes ambition, foresight and persistence. Believing in that dream enough to put your entire life savings on the line takes passion, balls and brass. Ed Brazier has spent the past eighteen months turning a life’s desire in to reality, Airdrop Bikes: A new bike company, based in Sheffield, aiming to turn good honest simple bike design in to very happy riders. He’s entering an incredibly crowded market, with a relatively small budget and is convinced he can make it work. And after just a couple of hours in his company, I now believe him too.

Ed’s journey started when he was just out of university with a yearning to become a designer in the outdoor industry. Actually, in this case it started with a Raleigh Mini Burner, “which was probably the best bike I ever had,” he said with a wry smile. He was a climber and a move to Sheffield’s girt and scene was an obvious one, as was taking a job with the local outdoor gear discounter. His persistence and drive led him to eventually create and head up the marketing design team within a company going through exponential growth. He developed valuable skills and an insight into how business works, but it never dampened his true goal.

Ed has been consistently putting money aside in to his business start–up fund from his very first pay check. Throughout getting married, buying and renovating a home and having a child, this nest egg has remained sacrosanct; his goal clear but still amorphous. Then, ten years down the line, he moved on to a new challenge which was to prove formative for a whole new set of reasons. Part of a management team brought in to turn around a bike company, he gave his all, worked long hours and ended up miserable. Despite doubling the company’s turnover in two years and restoring its reputation, the return of the itinerant owner triggered Ed’s swift exit and the realisation that he, “never wanted to work for somebody else ever again”.

After a summer of riding bikes, some much needed reflection and loving life again, now was the time; he was ready to try. Ed knew he wanted to start a business but still wasn’t sure which idea to commit to. In his fastidious way he weighed up his options and developed various business plans, but in the end,it was passion and excitement which won over more assured success. However, he’d never started a business before, let alone one which makes bikes on the other side of the world. From the outside he found, “the bike industry is opaque, they hide what they do and who their customers are”. Cold calling every bike manufacturer listed at the Taiwan Bike Show he eventually started talking to some willing factories and, “finding out how bikes come in to existence”. After getting a better idea on the numbers he concluded, “on paper it looked really, really hard, but also not impossible. I became obsessed with finding out if it was actually possible”.

Ed admits he is not an engineer but he is a designer, “I knew I was comfortable with understanding a problem, then working through a process to find a solution. As a designer that’s your stock and trade”. Ed talked a lot about the limitations imposed on the design process by the small scale production his budget would allow and turning those limitations in to possibilities. It, “engaged every ounce of his intellect. I buzzed off it”. He did look in to the idea of expanding and getting investors on board but needed, “the freedom to learn and make my own mistakes”. He believes, “for practical and aesthetic reasons the bike should be as simple I can make it”. As a designer he wants to make the most simple and elegant solution he can, within those limitations. “A lot of bikes are over complicated. They didn’t need to be as complicated as they were and the manufacturers were probably just trying to differentiate themselves”.

In a crowded market manufacturers feel the need to stand out and have a USP, “but it costs more in R&D, in engineering, in manufacture. You have more points of failure and it’s harder to maintain. You end up having to charge your customer more for all that stuff. For what gain?” Ed distilled it down to a simple philosophy, “You don’t need all that stuff. I don’t need to be able to say my bike gives you this unbelievable performance advantage. I just need to be able to say ‘my bike is fucking Rad and it’s loads of fun to ride”. 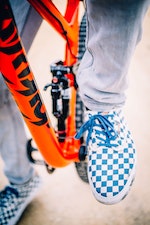 He’s been through a very steep learning curve figuring out how to work with a factory and create a design that they can manufacture that hits all of his criteria, from cost through to radness. He burned several months initially working with a factory that pulled out unexpectedly. However the knowledge he gained in the process was priceless as, second time round, he hit the floor running. His first bike, The Edit, is the result. Taking advantage of the lapsed Horst Link patent, Ed has constructed a lovely looking bike with the kinematics and ride characteristics he wanted. He’d had a penny-dropping moment riding in Finale Ligure a few years previously arriving with a 5” trail bike with an XC heritage to ride the Super Enduro tracks. Having ridden the terrain, both up and down, and had ridden a few people’s bikes he knew what he needed next. He was embracing the now common place enduro revolution, “I never thought I’d find myself riding a bike with that much travel and that sort of geometry. But suddenly I understood what it was all about, they rode like downhill bikes but you could pedal them. Everyday, for a week”.

With his graphic design background the aesthetic of the bike was just as important as its function. Again pushing at the limitations, “All the tubing is mechanically bent,” he didn’t want the expense of opening a hydro-forming tool. Reusing tooling the factory already had for CNC components also meant he avoided those costs. He took the approach that, “within the tools we have, this is what we can do”. Acknowledging his own limitations he paid an independent design engineer within the industry to validate his final design, giving him professional backup and confirming his decisions. His one big compromise has been the exclusion of an extra large frame from the range. Ordering only 100 frames in total he couldn’t also satisfy the minimum order for the additional size but hopes to remedy this in the future.

With Airdrop he desperately, “didn’t want to be the ex-marketing guy starting a bike company”. Having been balls-deep in the marking world for 12 years it’s refreshing to see Ed’s determination to cut through the marketing bullshit and produce a product that he really believes in. He met my cynicism with heartfelt desire and aspiration. “I wanted the bike to have real substance, to be a great bike, so then the marketing bit would just flow. It would be easy. The bike will speak for itself”. Thinking back to how it had begun he mused, “if you were focused and you really cared about doing it right, this actually is a really good idea”. He’s, “looking for customers that recognise that after you’ve been sold the idea of this bike, you have to live with it. You have to be able to maintain and ride it in all that mud and grit and grime”. Although the Edit might not be made in the UK it has been designed and tested in all the conditions we are used to. It’s simple to service and the bearings are easily replaced.

The bikes are now in production and they will be shipped right about now. Ed’s already had pre-orders including one from Denmark who hasn’t even seen the bike in the flesh let alone ridden one. Is this some evidence perhaps that he’s found his niche and his honest approach is already shining through? His initial hope that if he could, “come up with a descent product and look after his customers, the rest will take care of itself,” will only be borne out with time. Ed would like to see his business grow, the range expand and to gather together, “a group of cool, like minded people, who are really invested in working on something they believe in and just enjoying what we do everyday”. For him it’s not about the money, he’s seen what that can do, this is now his life and he wants to enjoy it by building great bikes.

The Edit is available from £949, frame only, or as a frame kit or complete build, all direct from Ed. We’ll have one on test here at Dirt very soon.

World Championship winning brand needs to have yet another look at its production bike.

Now in four sizes and available for pre-order

Burf and Tam are banging them out...

All the latest from one of the UK's biggest distributors.