Propain are the latest German direct sales brand to spring to our attention with their killer, no-nonsense rides and great value. In fact, we liked them so much, we formed a team together.

With Phil Atwill on board they are killing the content game and backing it up with solid World Cup results.

What achievement of the company are you most proud of?
Robert: “Probably simply to have created a bike company from nothing makes me very proud. We started Propain from a garage with a few thousand €, with a dream and lots of passion. We worked for years for nothing, sometimes at night because we needed another day job to survive. To see that all this hard work is starting to pay off makes me very proud. “

What has been your biggest product development?
Robert: “The biggest development by far has been the new Rage Carbon DH bike. The bike features several never before seen developments that make the Rage Carbon the new benchmark for downhill bikes. Beside all the engineering efforts the amount of input received from riders and our World Cup racing team was incomparable to any other project here at Propain.”

Is @phil_atwill going to beat Gwin on this bike in 2017? Robert Kraus dropped the new Rage Carbon over today to discuss tactics with Phil. Great geometry, price and 32lb! @propain_bicycles @propaindirtzelvy

What was the brand working on 20 years ago?
Robert: “Simply nothing. We exist since 8 years and started with our Rage Downhill bike at that time. It was more a hobby than anything else. After 3 years in business we went into direct sales and launched Propain as you know it today.”

What is the direction of the company setting up for the next 20 years?
Robert: “I guess we stick to what we are good at. Highly customizable gravity focused mountain bikes for riders of all ages. Maybe they will pop out of a 3D printer in 20 years…who knows…”

What influence has Dirt had on your company?
Tobi: “Dirt had a great influence on Propain… especially when it comes to our Propain Dirt Zelvy World Cup Team. It was a huge step for us to join the world cup circus and we could not wish for a better partner than the Dirt Magazine and Ben Reid and his boyz.”

What has been the biggest lesson the company has learnt in the industry?
Robert: “Long chain stays make downhill bikes fast as f*#%$. Sometimes it’s good to swim against the stream.  (No worries, we still offer the short version as well, but you have the option to try out something new)”

What do you dislike about working in the bike industry?
Tobi: “I love to work in the bike industry and its much harder work than what it looks like from the outside. But I don’t want to complain about that. The bad part is that I see all the latest swag coming out and I spend my money quicker than I earn it.”

Give us a story from your wildest moment in mountain biking?
Robert:  “Maybe a near crash with a bear in Whistler. Doesn’t get much wilder than that…”

Your favourite or most memorable Dirt Cover?
Tobi: “Looking back through all the covers you realize how many times Peaty was on there and how long this guys was on top of the game. Just mind blowing…” 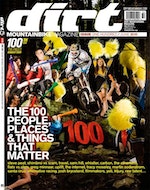 What would you like to see from Dirt over the next 20 years?
Florian:  “Basically what you did before… add some beers and hot chicks and you are sorted for at least 20 years…”

What would be the first question you would ask Dirt?
Robert: “Where the fuck is our test bike we sent you?  (Just kidding guys, we got it back yesterday…it’s all good)”

Who have been your favourite riders of the past 20 years?
Robert: “Peaty for being wild but professional at the same time. For me he really embodies the spirit of mountain biking and seems to be a great lad.
And of course our man Phil Atwill…always excites me to see what he is able to do on a bike.”

What Rider has most pushed the boundaries over the past 20years?
Robert: “I think Shaun Palmer has pushed the sport in the right direction and I believe mountain biking would be different today without his input.

But there are many other riders who also deserve credit for pushing boundaries in their areas, such as Josh Bender, Nicolas Vouilloz, Brendon Semenuk, and many others.”

What does the next 20 years bring for Mountain biking?
Robert: “I hope it’s not going to be all electronics and mobile phone connectivity but I think my wish will not come true. But I also think we will see more interesting developments with 3D printing and other new technologies being involved.”

What’s your opinion on E-Bikes?
Robert: “I consider them as something in between motorcycles and mountain bikes but neither nor. It’s something new and exciting and deserves a new place in the market. But I think it should be a little more separated from pedal bikes.”

What life lessons has Mountain biking taught you?
Robert: “Founding my own bike company has taught me that you should always follow your passion in life and forget about the money. By doing so you bring out the best in you and one day it might start to pay off. If not, no problem…at least you are doing what you love, every single day.”

What’s been the most questionable thing to come out of Mountain biking
Florian:  “The invention of a saddle without a nose without a doubt. Are you on crack? This is more like a medieval torture device than anything else.”

Who doesn’t get the credit they deserve in the industry?
Robert:  “The Germans. Somehow we are known to ride bikes with tons of electronic bullshit on the bars, 3 gear rings in front and bull horns…in lycras!  WTF… where are those guys you are talking about???”

Loris Vergier and Luca Shaw on the Santa Cruz Syndicate

Loris Vergier and Luca Shaw on the Santa Cruz Syndicate