We thought our 20 years was a big deal, but that’s nothing compared to Norco’s 50. Bert Lewis founded Norco Bicycles in 1964 with a simple vision: build better bikes. It’s now a global brand with over 125 models.

Along the way, Norco has been a huge part of cycling culture. From pioneering BMX racing to supporting key North Shore riders and even forming a team with us here at Dirt, they’ve made some great choices along the way.

What achievement of the company are you most proud of?
“It has been exciting to see Norco Bicycles grow on the global stage and become a company known for listening to professional and recreational riders to help develop best in class products across all disciplines.” – Jonathan Duncan

What has been you biggest product development?
“Personally I would say the development of our Gravity Tune geometry concept on the original Aurum. Ben and Dan of Dirt/Norco were instrumental in this.” – Owen Pemberton

What was the brand working on 20 years ago?
“Bullet proof North Shore bikes…  and we became a world leader in just that.” Pete Stace-Smith

What influence has Dirt had on your company?
“Being associated through the Dirt/Norco team for period of years really gave the Aurum and the Norco brand world recognition through it’s development and bringing it to the World Cup stage.” – Pete Stace-Smith

What has been the biggest lesson the company has learnt in the industry?
“Continuous improvement. Always pushing to develop better products is key to success. Enjoying what we do, having fun and riding bikes is critical too.” – David Cox

What do you dislike about working in the bike industry?
“I go for a ride and I’m still working. At first it doesn’t bother you, I mean it’s riding, right? But it sneaks up on you. It’s taken me a while to learn to separate my work brain and my ride brain, I’m still not very good at it.” – Owen Pemberton, Bicycle Design Engineer

Give us a story from your wildest moment in mountain biking?
“I had the honour one day to lead Ben Reid and Dan Stanbridge (Dirt/Norco) down some of the trails on Vancouver’s North Shore, but I was on my 4X racer. A short travel, small sized 4X weapon that wasn’t set up or intended for the steep rough terrain that we were in. I recall us all being wheel to wheel, flying down the Shore as race pase. I remember the stress I felt having two WC racers on my wheel and wishing I was on a larger bike! I held it together until the very end when a brake line snagged on something and I was spectacularly ejected into a rock garden with Ben and Dan piling up behind. Good news was the pub wasn’t far off for a few post ride pints! “ – Jonathan Duncan

Your favourite or most memorable Dirt Cover?
“The Rule Britannia, Steve Peat cover. That’s just the image in my head when I think of Dirt.” – Owen Pemberton What would you like to see from Dirt over the next 20 years?
“Print mag! Awesome photos can be appreciated much more on paper rather than on a screen.” – David Cox

Do you have a favourite or memorable feature from Dirt’s history?
“I’m biased but: Issue 108 Obsessive Testing Disorder.” Owen Pemberton 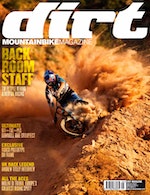 “As a reader that grew up flipping through cycling magazines, I really enjoyed the retrospective article on the bikes that shaped the furture of DH, including Norco’s VPS Shore.” – Jonathan Duncan

How were you first introduced to Dirt?
“Living in Vancouver Canada, I found a magazine shop that brought in UK publications. This was the only place I could get a hold of a copy, but they were always in short supply so you had to learn the timing the new issue would arrive.” – Jonathan Duncan

“I think I just happened across the first issue in the WHSmiths in Cov town centre. I still remember picking up that first issue and just being blown away. Compared to every other mag at the time it was just so different, so raw and edgy. It’s weird how I remember that.” – Owen Pemberton

What has Dirt taught you over the years?
“Riding in jeans looks cool…” – Owen Pemberton

Who have been your favourite riders of the past 20 years?
“The usual suspects: Peaty, Vouilloz, Palmer, Hill.” – Owen Pemberton

“Ben Reid and Bryn Atkinson. Their riding styles are so impressive to witness and always make me want to ride.” – Jonathan Duncan

What Rider has most pushed the boundaries over the past 20 years?
“It’s got to be Hill, I’m pretty sure he invented going inside!” – Owen Pemberton

“I feel it’s the riders behind the scenes that have the skills, the confidence and the willingness to work with the engineers to help test new philosophies and theories. These bikes start as wild ideas and need the validation from open minded riders to see them through to polished bikes that change the way we all ride or look at cycling.” – Jonathan Duncan

What has been your favourite or most memorable race?
“Hart’s Champery World Champs win. Anyone who rides the wet with that much authority deserves to win. My chest was in my mouth the whole run!” – Owen Pemberton

“For me it was the 2010 World Champs in MSA. The race was amazing with Sam Hill winning and Stevie Smith being right there on the podium in front of his home crowd! Plus, the celebration afterwards was legendary.” – Jonathan Duncan

What does the next 20 years bring for Mountain biking?
“Well, seeing the HUGE changes that have transpired over the past five years alone, I see nothing but more fun development in the next 20.  I can’t imagine what this will bring, but I’m excited to embrace and be part of it.” – Pete Stace-Smith

“I believe more accessibility for the masses which will hopefully elevate the sport into more mainstream outlets. The technology with bikes continues to get better and better each year. Trail builders and land owners seem to be growing the areas where people can ride. It’s all leading to more people riding, which helps everyone involved.” – Jonathan Duncan

What’s your opinion on E-Bikes?
“I’ve enjoyed the E- mountain bikes that I have ridden. I’ve had fun, which is the first rule and I’ve been able to cover much for terrain. Currently, I don’t see the need for one personally, but if it gets more people stoked on riding, then I’m in.” – Jonathan Duncan

“I think they are good, as they are getting lots of people onto bikes that may not necessarily ride.  With fuel (price and in the future scarcity), pollution, traffic congestion, and a hundred other problems associated with regular gas or diesel engines, it only makes sense.” – Pete Stace-Smith

What life lessons has Mountain biking taught you?
“Everything seems harder in your head than it really is.” – Owen Pemberton

Who doesn’t get the credit they deserve in the industry?
“All the people just quietly doing their jobs, keeping the industry ticking over.” – Owen Pemberton

A chit chat with the UK Champ

More of the same this year please!

Is this the first picture of Canyon's downhill World Cup team?

Is this the first picture of Canyon's downhill World Cup team?

Two key riders down for Norco