Callum Philpott recently went out to Commencal Bikes’ HQ in Andorra to try out the new and improved Meta AM V4.2.

Commencal often come up with some interesting looks for their bikes, and the 2017 Meta V4.2 is no exception. The previous V4, one of the bikes in the 2016 Dirt 100, looks similar but they’ve updated this new bike, giving it a more progressive feel in comparison. The Andorran crew have slackened the head angle, introduced more travel and now use a metric sized shock as standard. The top tube has been redesigned in the process so now a standard shock will fit, without the limitations of the 2016 frame. 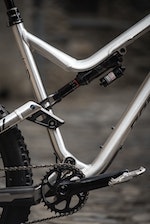 This new Meta is now equipped with a 170mm fork making it very capable even on the rougher downhill tracks; this being a significant difference to the 150/160mm travel set up on the current 2016 bike which is already a favourite of ours. Although Commencal haven’t changed the shape compared to the previous Meta V4 it has changed slightly in feel, having slackened the head angle by a half of a degree (now 65.5º) and making it slightly longer in the wheelbase, this gives it a more aggressive feel on the trail.

I found that I was able to throw it down all the full–on downhill tracks out in Andorra and it was able to hold its own, in part due to that reasonably long wheelbase (1205mm for size L) which makes it longer than bikes such as the YT Capra, although slightly shorter than the Radon Swoop. The bottom bracket is a good height maintaining its -12mm drop, just as on the current shorter travel version.

The bike feels very stable. I’m 5’9″ and rode a large as I seemed to be between sizes. The medium felt slightly too small and the large felt much better, although the seat sat a little too high for my legs. The range goes from small to an extra large with different specs but all with 170mm forks and 160mm rear travel.

On the top model the RockShox Lyrik and Super Deluxe metric shock work very well together and gave an excellent balanced feel to the bike. Having tried the previous model with the Pike and Monarch Plus, not only is there is a significant difference between the amount of travel but I found last year’s model to eat through the travel a lot easier than this V2.

The metric suspension has an optimised internal guide to improve the sensitivity of the shock, which gives the bike a more supple feel, meaning that it handles better on the rougher terrain.

The top of the range model (World Cup spec) comes equipped with Commencal’s own Ride Alpha components bar and stem, which have a good looking finish and a good feel. They also equip this model with SRAM’s XO1 Eagle groupset (verdict still out on this) and Guide RS brakes. They also spec it with a Reverb Stealth dropper post, which makes it a pretty good deal for the money. 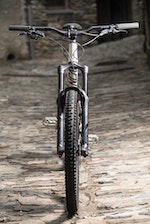 It made me feel like I was riding a downhill bike on most sections, having ridden it down the World Cup track in Andorra and it holding its own it really seems like you could take it down pretty much anything. It was also pretty fun on the jumps and was still pretty playful despite the wheelbase being so long; so all in all it seemed perfect for the alpine terrain I was riding.

The Meta is equipped with 25 to 30mm wide rims which makes it track better and the grip was noticeably different in the turns. It was a silent ride, making it feel solid. It is well balanced through suspension and the weight is fairly central. The BB height is slightly lower and sits at -12mm drop, although it feels as though it is more stable due to the longer wheelbase at 1205mm compared to the previous 1193 (in the large size) and 65.5 degree head angle. Boost width hubs are the business.

There are not a lot of faults with this bike at first glance, so I’m going to have to be picky and say that maybe it should be spec’d with the SRAM Guide RSC or Guide Ultimate brakes due to how aggressive the bike is and how capable it is of riding alpine terrain. In terms of price the Meta V4.2 has big competition from the benchmark YT Capra and now the Radon Swoop, which is lower, slacker, longer and significantly cheaper.

The Meta has been developed well and is a very capable bike, and I think it is up there with a lot of the long travelled enduro bikes in this price range. All in all it is great value for money and with the range starting at €2199 for the base model up to €4599 for the World Cup model Max Commencal and his team have made something for everyone.

If anything the Meta is simply an evolution of an already proven bike, more than anything though we love the durability of the aluminium frame, the visuals and of course the shape and feel of this bike.

Is this style of bike for you? Check out our BUYER’S GUIDE TO ENDURO BIKES.

One track, one race, one run

More features and increased travel for the ground muncher