We’ve been fans of Giro helmets for a long time here at Dirt, especially there ‘enduro’ style lids. I still regularly use my (very) old Giro Xen lid. It stinks but I just love it. Giro stopped making the Xen and brought out the Xar, which was a little bit more XC in styling, and the cheaper Feature (which has appeared in many Dirt photo shoots). So now we have the all new Montaro (and female Montara), which from this first look appears to have the styling of both the original Xen crossed with the Feature but with all the details and features (no pun intended) of the Xar… and with Mips. 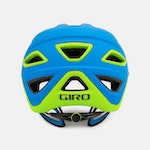 We couldn’t make it to the launch of the new helmet out in Whistler, but check out the vid and press release below, which give you a good overview of the product. Despite this, confident, full coverage, Montaro MIPS has impressive cooling power, achieved through the Roc Loc Air fit system and hydrophilic, antimicrobial pads. A dditional features include the Multi-Directional Impact System, full goggle compatibility, and an integrated camera mount. Tested with Giro trail riders like Graham “Aggy” Agassiz and Sarah Leishman, they will be available in October 2015 at Giro Authorized Dealers for €179/£129.

Key features of the Giro Montaro/Montara MIPS include:
• Optimized Ventilation: Strategic vent locations and deep interior channels combine with the Roc Loc Air fit system, which suspends the helmet a few millimetres above the rider’s head, allowing an unimpeded flow of cool air.

• Full Goggle Integration: Rubber strap grippers on the rear of the helmet and a P.O.V. Plus visor that allows riders to lift visor and rest goggles on the front of the helmet.

• MIPS Technology: MIPS stands for Multi-Directional Impact Protection System. There are three main components to a MIPS-equipped helmet: the interior foam liner, the Low Friction Liner and an elastomeric attachment system between them. In an angled impact, the elastomeric attachment system stretches to allow the interior foam liner to rotate independently around the rider’s head and redirect energy. Although the system only moves a few millimeters Giro’s testing shows that helmets equipped with this technology can reduce the amount of rotational force that may be transferred to the brain in certain impacts.

The 417 Project is all set to be one of the best UK mountain bike facilities in the country.

The 417 Project is all set to be one of the best UK mountain bike facilities in the country.