Sam Hill may be the quiet assassin of the World Cup pits but this bike is loud! Inspired by the Grave Digger Monster Truck, Hill called this the coolest bike he’s ever had and we find it hard to disagree.

Grave Digger is the monster truck conceived in 1982 by Dennis Anderson that Hill took his son Bam to visit in his native Perth earlier this year. Bam, following in his dad’s love for all things green and purple (just check out his custom Leatt helmet from earlier this year), had discovered the truck and was quickly obsessed with it and his model of Grave Digger. 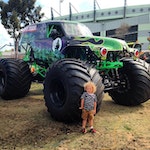 As Sam killed it at his previous two EWS rounds, Nukeproof thought they would treat him to something special and this was the result.

The eagle eyed among you may notice the new Nukeproof Superlight spring fitted and a Stevie Smith tribute on the seat stay as well, but enough talking, here’s a load more photos of this beast.

Another stars and stripes special for Gwin