One day, Adrian Bedford decided to make his own all mountain trail bike…the Bedfo Super Bike!

I love messing around in the shed making things but am not very good at it. So I’m in awe at people like Adrian who have the skills and patience to do a proper job. What with the rising cost of bicycles these days a build-your-own approach could be a feasible alternative, it certainly must be satisfying riding a bike that you’ve built yourself.

Engineer, Adrian Bedford, has done just that, built his own bike. Here is the story about his first creation “The Bedfo Super Bike” (that isn’t it’s actual name, it’s just what his mates are calling it, but I like it!)

A bit about me first, I am 33 and live in Dorset, I work as a mechanical design engineer and for the last 8 years I have worked in the Aerospace and Defence industry, I currently design military air to air refuelling equipment.

Before getting into the aerospace stuff I worked for Dyson developing some serious purple vacuum cleaners! I’ve always been really keen on making stuff so this project has been in my mind for years, I just haven’t had the facilities to get on with it. I now have a cool workshop and sometimes I find time to tinker!

I’ve always wanted to build a frame, initially I wanted to do a full carbon DH bike but over the years my riding has moved towards shorter travel bikes. Being small and light (and living in Dorset!) I find a DH bike a bit too much, trail bikes are way more fun but currently there is not much out there that has decent geometry and will last. I got fed up sending aluminium frames back for warranty so I decided to make something that would last and have everything just how I wanted it.

The frame I came up with is based on the Balfa BB7, 150mm travel with high pivot and idler. Here are some geeky stats!

The mainframe is steel, 4130 chromoly plain gauge tubes which I hand cut all the joints, my brother Phil CNC’d me a load of parts from 2.5mm 4130 sheet for the shock mount area and to reinforce the main pivot. He also turned me the BB shell and head tube from 4130. Once we had all the bits together a friend of Phil’s fillet brazed it (with my tea making and jigging help!). We didn’t bother to properly jig this first one, just bodge jigged each joint as we went. It moved slightly but I’m pretty happy with it. I reckon its straighter than a lot of top end ali frames.

Initially I designed a steel swingarm for it and I made all of the tubes ready, however it had some more complex bits that needed CNC’ing. Phil just didn’t have the time, so I decided to go ahead and make a carbon swingarm as I have everything here in my workshop to do it. Initially I made up some moulds for the dropouts as these were a tricky area, the rest of the swingarm is made without moulds of any sort. I made some simple thin walled tubes and an internal structure linking the shock mount and main pivot area, I then made the rest of the swingarm with blue foam carved to shape. 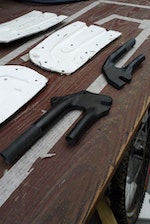 I’m really happy with the way it rides, its great on the really rough stuff and feels much like my old Balfa did. I’ve been trying to break it for around 3 months without success and its just got through 2 weeks in Verbier with no hitches at all! I’m well pleased with that, its already outlasted the last two aluminium trail bikes I’ve had! Obviously there are things I’d change, the chainstays could be a bit shorter, and the front end a little longer, and it’d be cool if the fork crowns didn’t hit the downtube! But for a first attempt I’m chuffed. Obviously should mention that without Phil’s help making parts and Andy the welding god, this bike would still be a box of bits!

I’m now working on making a frame building jig and have some ideas for a really simple 4 or 5″” trail bike built for ragging with a decent head angle and BB height. I’ve also just bought myself a small CNC milling machine so I should be able to make pretty much all of the parts myself.

So there you have it, my homemade frame. There are a lot of hours of hard work in these pictures, I hope you find them interesting!

The Superenduro final at Finale is lining up to be a spectacular end of the season race! We’re doing a feature on this Italian epic in...

The Superenduro final at Finale is lining up to be a spectacular end of the season race! We’re doing a feature on this Italian epic in...