The fact that these forks are constantly referred to as ‘triple clamps’ kind of says it all really. At this point in time (January 1997) most privateer racers were still using single crown forks, it was the beginning of a new era.

First up the prototype Pace forks: Pace have given us an exclusive look at their new Monster downhill fork. The fork will be available in the spring (no pun intended). We’ll be getting a set for test, but for now here’s a snippet. Technically, the Monster will give 150mm of travel, with 3-stage coil spring – plus air spring. Axle will be the usual 20mm spindle initially for Hope. Dialling in will be via thumb adjusters for pre-load and damping located at the top. Outer legs will be pure carbon and the fork will measure 508mm. See you in the spring! 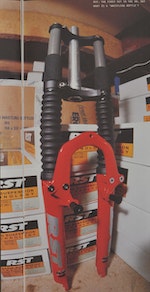 RST are to introduce a budget long-travel fork to downhillers. What they’ve done is to use the existing outer legs of their highly successful Mozo Pro 4.5 fork, extended the stanchions and sling dual crowns on it. Of course, by retaining this and not an inverted set-up, the system benefits non-disc users.

Inside the fork sits an MCU and mechanical spring stack with twin air-damped compression and rebound systems. Like the originals, legs are ali with magnesium sliders and brace. Preload is hand operated via the adjusters on top of the legs. The forks will retail for £389.95 which is bloody cheap!

Here’s a sneak shot of the fork the day it arrived at Zoobits. Big Geoff, head of the Surrey-based distributors, told us they expect to have the new XXL American RST triple crown fork into the shops by Christmas. This fork will be in the sub-£1000 bracket. Tests to follow. About two years ago Dan Hanebrink started testing the new six inch travel triple crown fork. Seen as ‘outlandish’ by many, “That’s too big!” and “Who needs that much travel?” were some of the statements coming from techno heads. Dan stood firm, continuing to develop and test the fork. In no time, Hanebrink’s idea had been recognised by many designers as a breakthrough in suspension technology. By this time, the downhill market was rapidly gathering pace, with all the major players in the fork market introducing their own version of the ‘long travel fork’ as they were to be known. With his new fork costing about $2,500 dan still had to work hard to fulfil orders, adopting the philosophy that cost in no object in making a better fork! Hanebrink’s ‘upside down’ fork is ‘custom’ built to each individual racer’s needs, with improvements being made in the design on a regular basis.

When Bullet Bros approached Hanebrink about a year ago. The inverted design was in full production, but the boys at Bullet realised that if you could return the fork to its conventional ‘right side up’ position, then with the reintroduction of a brace, racers would have the option of either canti or disc set-ups. The higher level of racing is more than able to afford this sort of equipment due to sponsorship deals, but to mere mortals having a ‘disc only’ set-up obviously requires more specialist wheels, complete disc assemblies, hollow clamp dropouts, and so on. By simply turning the fork over, all the extra cost is eliminated thus making it more affordable – and adjustable – to the consumer.

The Zzyxx is a stock six inch travel fork which can be adjusted down to four inches, so it’s tuneable to any condition. One of the main features of the new Zzyxx fork is its materials. Oversized seamless aircraft tubing is used throughout, with the whole lot being produced on CNC machines. Both the sliders and the outer legs are one and a half times the diameter of standard forks! With these dimensions, the legs can remain close together to allow for canti brakes. The Zzyxx fork is reputed to be ‘the most rigid conventional fork on the market’.

Does that lot bring back a few memories? For me it certainly does as I had a set of both the Zzyxx and the Pace forks, plus numerous mates of mine spent hours trying to tweak the elastomer stack in their RST’s, and finding ways to try and make the air damping actually work. The thing that really strikes me though is how we often look back through rose tinted spectacles. I mean the RST’s were considered an absolute bargain at the time as they were half the price of the competition, but if you stick that price into an inflation calculator then that price is the equivalent of about £600 today. You might be thinking that’s not too bad, but these forks were beyond basic, and to say they were shocking by today’s standards is a massive understatement.

You didn’t really get great performance even if you spent way more money too. If I remember rightly the Zzyxx forks sold for about £900, and that was before you added on the cost of 20mm dropouts and disc mounts. Even at the basic price though that works out around £1400 in today’s money. Now you can buy a truly incredible set of forks for that kind of money, but the Zzyxx were truly awful. Actually, that’s not quite fair. If they were well serviced and there wasn’t even the slightest hint of moisture in the air then they’d work ok (as long as you didn’t over tighten the brace clamps as the legs were so thin that this would cause the forks to bind), but it’s no exaggeration to say that if you did a run in the wet you’d be lucky to get 2″ of travel after about 30 seconds. The only thing that stopped me binning them straight away was the fact that they were so simple and quick to strip, you could easily do it between runs, and you had to! The replaceable dropouts literally just screwed into the legs and the tiny bushings (they must have only been about 5mm long, and along with the terrible seals were the main cause of all the problems) were just simple nylon split rings. The industrial looking sealed damper unit was about the only thing that was even slightly reliable on these forks.

Once I had finally managed to get shot of those forks I moved on to a pair of the Pace ones, and what a revelation. I was lucky enough to get a pair from the first very limited batch which Pace took about a week to make each fork, but sadly the later production ones which were churned out in a fraction of the time never came close to matching the performance of those early ones. I should also point out that this fork was pretty ahead of its time. As well as having an externally adjustable coil spring these forks also had an air spring which you could either run empty for a linear feel, or pump up for more progression. You could also find external damping adjusters that covered pretty much everything that you’d find on a good fork today, and you could also do a lot of tinkering internally. The skinny steel stanchions helped give buttery smooth performance and because these forks were designed and made in the UK the seals were far better than most, plus you also had grease ports to help increase service intervals. I actually still have these forks, and now they’re hanging on my living room wall along with a Pace frame from the same era. (Yes, I probably am a little crazy, but I kind of look at it as a work of art and it’s better than it sitting in my shed.)

Anyway, the main thing I am left thinking after this blast from the past is that maybe we’re wrong when we’re always saying ‘things never used to be this expensive, the prices are stupid these days’. Going by these products things aren’t in relative terms any more expensive today, but they’re a whole lot better. We’ll see if that trend continues with the other products that we dig out of the archives in future, but in the mean time what are your fork memories?

A massive gallery of bikes and riders from the 2012 Fort William World Cup!

A massive gallery of bikes and riders from the 2012 Fort William World Cup!

Fort William DirtTV finals action from the Parkin Bros! http://mpora.com/videos/sPqspYkiN Just to shatter the illusion that life filming World Cups is easy. Here’s a photo of the...